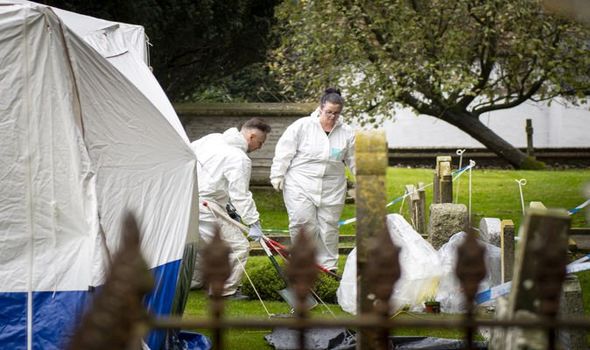 Some locals are concerned after police cordoned off around 15 graves and put up forensic tents at St Andrew’s Church in Collingbourne Ducis, Wiltshire. Police arrived at the graveyard early on Monday morning as they set up for a planned “archaeological investigation”.

Four police officers were seen standing guard over the cordon today as three crime scene investigators and a CID detective worked directly in front of the church’s main doors.

Fresh soil could be seen thrown on a tarpaulin over two graves next to one of the forensic tents as the dig gets underway.

A concerned local, who was walking his dog in the area, said: “It is worrying but police say there is nothing to worry about.

“It’s hard not to be concerned when they are digging up the graveyard just round from my house.

“My mum is buried there but her grave is just outside the cordon, so I don’t have to worry too much. Still, it can’t be a nice experience for others.

“You can see soil thrown across graves. It must be upsetting for those with relatives there, especially if they can’t visit them for however long – weeks maybe.”

“Relatives of those whose graves are nearby have been informed. This should not cause any disruption to the public, with the route remaining open for pedestrians.”

No details about the operation were released by the force who said they will “provide further information when appropriate”.

Afghan family says every Brit they've met have been 'angels'