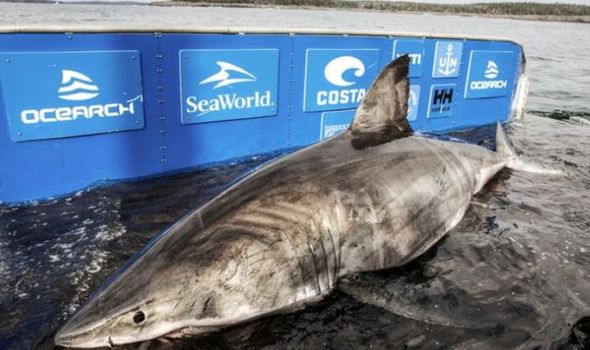 The 17ft predator has become the only second shark in history to have crossed the Atlantic and experts at OCEARCH has warned the female shark could be headed straight to the UK in time for summer.

The 235 stone female, known as Nukumi, usually swims in the west coast of America and Canada.

But the 50-year-old matriarch, the largest ever tagged in the region, has taken a swerve east, across the Atlantic.

She surfaced long enough for the tag in her dorsal fin to ‘ping’ a GPS location back to researchers at the science organisation OCEARCH.

Its chief scientist Dr Bob Hueter said: “At this point in her track, Nukumi has crossed from the western Atlantic to the eastern Atlantic over the Mid-Atlantic Ridge, the dividing feature between west and east.

“She has been swimming eastward for about two months since she left the US coast off the state of North Carolina.

“As of her last known location, Nukumi was still about 1,700 nautical miles from the UK.

“Now, that is less than her distance from the US coast, so she is capable of reaching the UK coast.”

But he added: “We would not predict that she will do that, as white sharks are rare off the UK.”

Nukumi’s voyage so far has taken her 1,700 nautical miles off British shores but experts said she is “capable of reaching the UK coast”.

Others have said they believe the shark could be pregnant and is looking for a place to give birth away from male counterparts.

Nukumi is the largest white shark tagged in the Northwest Atlantic by OCEARCH to date.

The tracking tag was placed in Nova Scotia in October 2020 and shows she travels a stagger 44 miles each day on average.

In February, she left North Carolina and has travelled around 5,570 miles.

It is believed she crossed the ridge around April 5 and has “pinged” a number of times since.

Back in 2014, another great white – known as Lydia – made the crossing, stunning scientists as she travelled to the court of Portugal.

There is a documented population of great whites in the Mediterranean and have been blamed for several attacks.

Back in 1989, a diver was reportedly eaten alive by a great white near Tuscany and his body was never found.

Back in January, experts warned great white sharks are “more than likely” to be swimming in British waters following more than 100 sightings.

Over recent years, anglers have claimed to spot the terrifying sharks off the coast of Devon and Cornwall.

National Geographic explorer Professor Yannis Papastamatiou, who works at Florida International University, said hotpots for species of shark are Cornwall, Ireland and the coast of Scotland.

He told The Sun: “Britain is arguably the best place in the world to see a basking shark and porbeagles are quite common in the UK.

“Fishers do occasionally catch them. They’re a close relation of the white shark.

“They are probably the species most frequently misidentified as a white shark, which is an understandable mistake.”