A greeting cards company has hit back after Banksy accused it of trying to “take custody” of his name so it can sell “fake” merchandise of his art.

The firm Full Colour Black said the anonymous artist’s comment was “entirely untrue” as it defended its position in an ongoing trademark legal row.

The North Yorkshire-based company said in a statement it was a “legitimate enterprise” that did not “infringe his rights in any way”.

Banksy claimed he had been forced to open his new homeware store in Croydon, south London, this month after the legal dispute with Full Colour Black.

The artist’s store, called Gross Domestic Product, is in the windows of a former carpet shop.

It will sell a range of “impractical and offensive” merchandise created by Banksy.

A lawyer advised him to sell his own range of merchandise products to avoid his trademark being used by someone else under EU law. 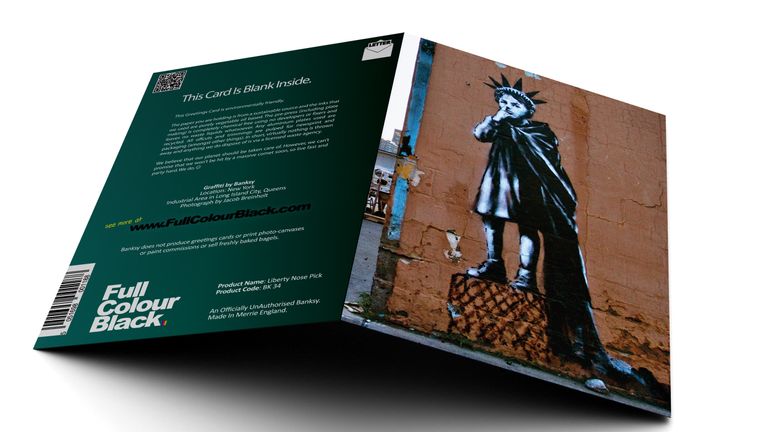 The dispute comes as a Banksy artwork, not owned by the artist, sold for almost £9.9million at auction. The work depicts MPs in the House of Commons as chimpanzees.

Andrew Gallagher, owner of Full Colour Back, said the company was a three-person “tiny business” and not a “big corporate group”.

His statement added: “We are not corporate… we sell greetings cards from our home.

“It is entirely untrue that we are attempting to ‘take custody’ of his name.”

The company claimed its operations saw it “legally photograph public graffiti” to make it available to Banksy fans. 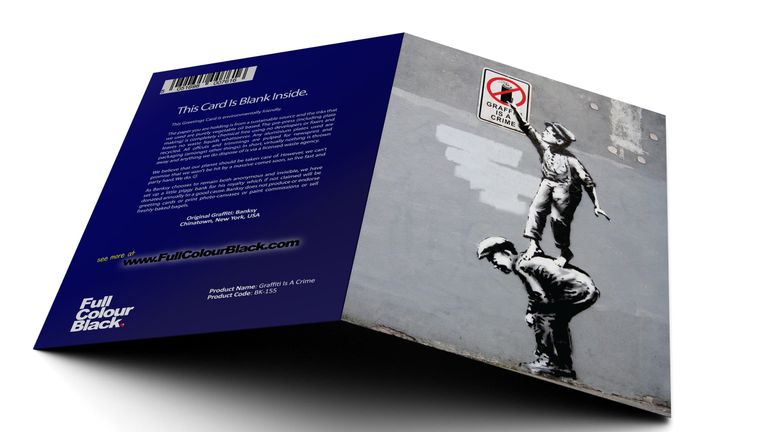 Mr Gallagher added that his business had been supplying cards since 2007.

The Full Colour Black statement said: “We don’t infringe his rights in any way. We don’t use his trademarks or his brand name.

The company said it does not sell to supermarkets and only works with independent retailers and small business owners.

Full Colour Black claimed Banksy and his lawyers had been contacted several times since 2010 to offer to pay royalties.

Aaron Wood, a lawyer from Keystone Law representing Full Colour Black, confirmed the greetings card company had made an application for a declaration of invalidity against a Banksy EU trademark.

Banksy, outlining his motivation for the shop in Croydon, previously said: “A greetings cards company is contesting the trademark I hold to my art, and attempting to take custody of my name so they can sell their fake Banksy merchandise legally.

“I think they’re banking on the idea I won’t show up in court to defend myself.”

Items on display in the shop, which are only available to buy online, range in price from a £10 signed spray paint can to a handbag made from a house brick.

Proceeds from the products will go towards funding a new migrant rescue boat, Banksy said.

The artist said he had been producing work for a few months for “the sole purpose of fulfilling trademark categories under EU law”.

He added: “I still encourage anyone to copy, borrow, steal and amend my art for amusement, academic research or activism.

“I just don’t want them to get sole custody of my name.”