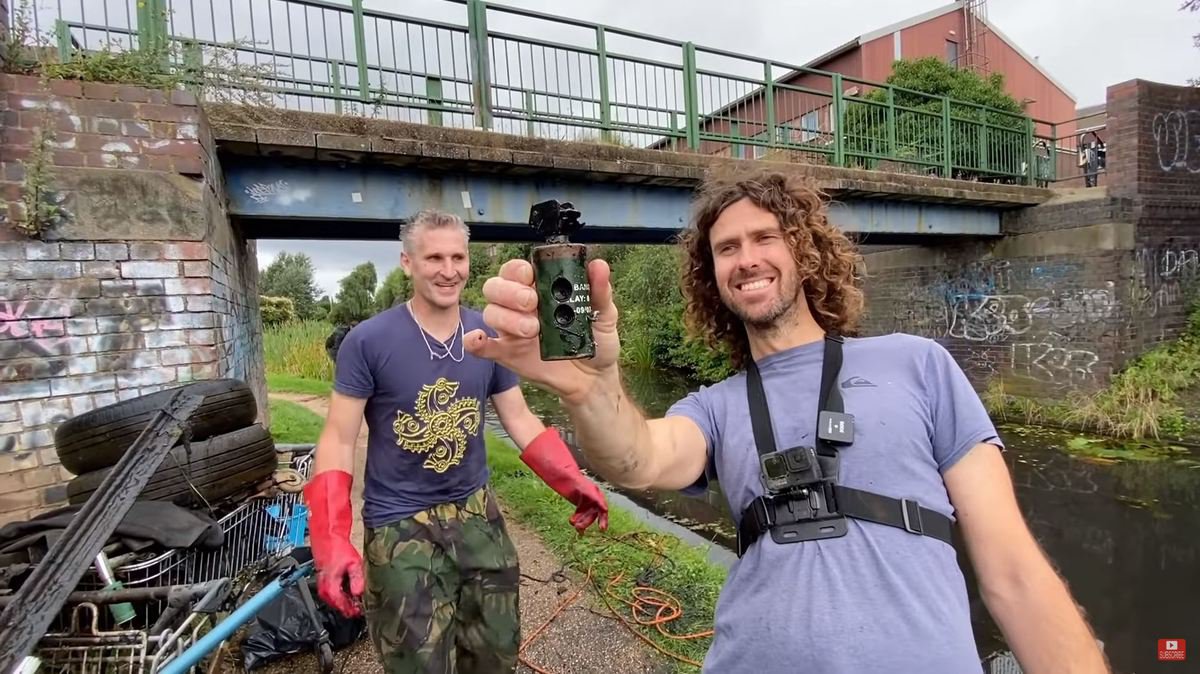 A magnet fisherman who pulled a grenade from the Birmingham Canal has rated it as among his strangest ever finds around the world.

Leigh Webber, better known as the Bondi Treasure Hunter, has also found ammunition, safes and voodoo charms while on his travels.

The 41-year-old, who is originally from Australia, spoke as he prepares to return to England for another year of the world’s biggest magnet fishing event, which is due to take place in August.

Based in Amsterdam, his thirst for adventure has taken him across the world and included diving in the sea as well as casting in powerful magnets from canal and river banks.

The YouTuber lived up to his billing at last year’s event in Walsall, on a stretch known as the Birmingham Canal Navigations, when reeled in a ‘flash-bang’ grenade out of the river at the meet in aid of Cancer Research UK.

The device still had the word ‘BANG’ legible on the side but proved harmless on the day, entitled Colab 129, which attracted more than 250 people.

Leigh told Metro.co.uk: ‘You get a giant magnet, attach it to a rope, throw it in the canal and see what sticks basically. You never know what you’re going to pull out and that day we got a grenade,

‘I think it’s called a flash grenade. I was pretty scared at the time, you want to pull it off but then you don’t want to get near it. There were some fellas there who know about this kind of thing and they had a look at it and said it had been used, all the sides had exploded out of it.

‘Someone said they were military or police issue, it was a pretty solid piece of equipment. You could see where loads of pellets had come out from the side. I took it to the guys who organised the event and they handed it over to the authorities.’

The device is believed to be a ‘nine banger’ grenade, which explodes with flashes and sound blasts and is intended to stun targets in hostage and other crisis situations.

While the spent explosive might be unusual on the Wyrley and Essington Canal, in Leigh’s scheme of things it has some serious competition as a standout item.

‘Anything that you can imagine has been thrown in the canal or the water.

‘There’s been some strange things over the years, the grenade and a jar of voodoo charms are up there, but it’s a long list. The good thing about magnet fishing is you never go home without a catch, ever. It’s also cleaning up the environment, which is really good too.’

The explorer, who is sometimes joined in his social media videos by girlfriend Nicky Tulp, is looking forward to returning to an as-yet undisclosed location in the Midlands as this year’s Colab event takes place on August 21.

Travelling across alluring and exotic locations, including Croatia, France, Ibiza, New Zealand, Thailand, and around his native Australia, his other explorations have included underwater metal detecting and scuba diving,

He has also reeled in motorbikes, cannonballs, jewellery of all descriptions, including a £125,700 watch, and a number of large safes.

Metal detecting above ground in England has yielded finds including a Roman coin hoard.

In one notable outing in Amsterdam last November he found a safe with euro coins, sets of keys, bullets, and a gun magazine inside.

All of the criminal loot he finds is handed over to the relevant authorities.

Leigh grew up as a surfer and discovered his passion while snorkelling on a day when there were no waves.

He began Bondi Treasure Hunter to meet others who shared his interest, travelling abroad after being bitten by the exploration hobby.

Leigh has amassed 397,000 followers on Facebook to date, a figure that is likely to have grown by the time he lands back in the Midlands this summer.

He said: ‘I loved being in the ocean and when the surf was flat I went snorkelling and found some coins on the bottom of the rocks.

‘I thought it looked pretty interesting so I dusted off the sand and it was loaded with coins. I thought this is so cool so I got a water-proof metal detector and it went on from there. I didn’t know where it was going to take me, it just led me down a rabbit hoIe.

‘I just like meeting other like-minded individuals and I’m looking forward to coming back to the Midlands and being part of a good thing for charity.’