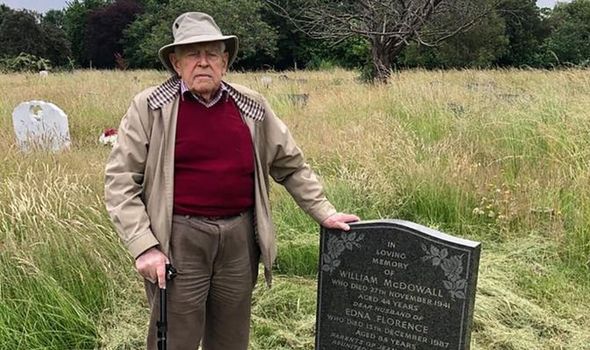 Keith McDowall, 91, couldn’t pay his respects to his dad as the long grass had completely overgrown Mitcham Road Cemetery in Thornton Heath, near Croydon, south London. He was saddened to see the site had been “allowed to deteriorate” last month.

But after visiting again the following week – on Thursday July 1 – Keith asked gardening staff for assistance. They had to mow a small pathway into the grass so the man could visit the tombstone.

However, overgrown grass surrounds the rest of the graves at the late Victorian cemetery, which is managed by Croydon Council.

Keith, who has to travel to the site from Islington in the north of the capital, told My London: “Gardening staff located my father’s grave for me in the overgrown site and mowed a small pathway so that I could make what could be my farewell visit.

“I had failed completely to find the gravestone a week earlier even though I knew the registered number and its approximate position, such is the way the whole cemetery has been allowed to deteriorate.

“Clearly not everyone seeking to find a gravestone can be given the special treatment I received, so I do urge the pain and concern it represents to relatives or descendants to be recognised by the financial heads of Croydon Council.”

The man’s father, William, died in 1941 aged 44. He was a production manager at Croydon Engineering Co, which produced plane parts for the RAF.

Muhammad Ali, cabinet member for sustainable Croydon, had said overgrown grass would be cut last month. He said extra resources were being allocated to cutting grass at all the borough’s cemeteries.

And, on June 29, the council, controlled by the Labour Party, itself tweeted: “We’re allocating some extra resources to grass cutting in our cemeteries – this should be done within the next two weeks, weather permitting.”

But photos show this has not yet been done.

Croydon Council and Cllr Ali were contacted for an update today.