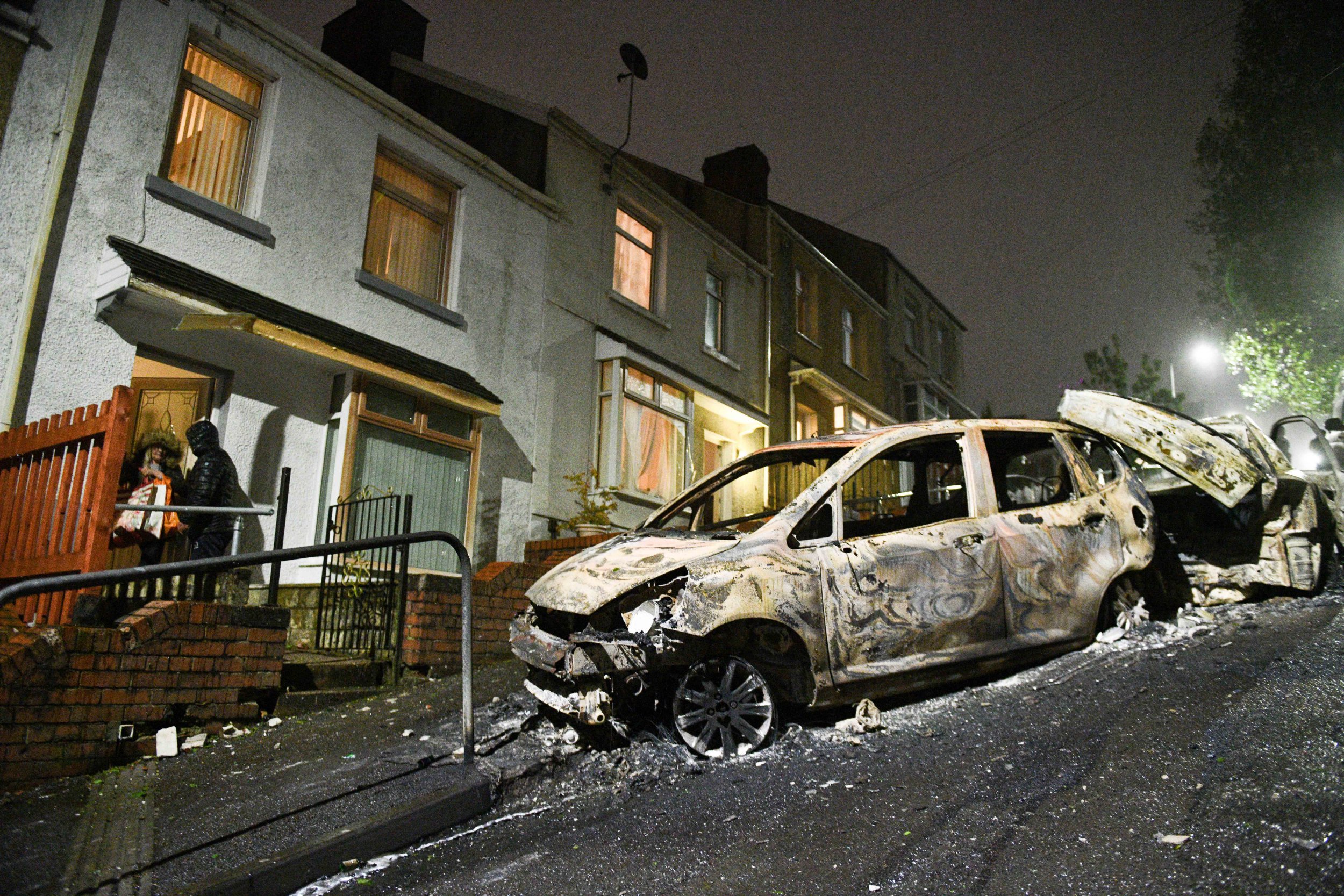 Eighteen people that turned a housing estate in Swansea into a ‘war zone’ in 2021 have been jailed.

Violence erupted in the inner-city area of Mayhill last May during a peaceful vigil for a local teenager who had died from an unintended drugs overdose.

Videos shared on social media showed cars being torched and then rolled down a steep hill, and houses vandalised.

Police officers were also attacked during the two hours of disorder, which shocked people across the country.

A total of 27 people aged between 15 and 44 were charged with offences relating to the riot.

Judge Paul Thomas described it as ‘the worst outbreak of mass violence’ that had occurred in Swansea during his lifetime.

He said the sentences he had imposed would send a ‘clear message to reassure the residents of this city that such behaviour will not be tolerated’.

The 17 men and one woman were sentenced at Swansea Crown Court on Monday to a total of over 84 years in prison.

All were told that they would serve half in custody and the rest on licence.

‘Those privileged to live in the city consider it a generally safe, peaceful place to live and to raise a family,’ judge Thomas told the court.

‘But in May of 2021, you all took part in the worst outbreak of mass violence that has occurred here in my lifetime and far beyond.

‘One witness described the scene on Waun Wen Road as resembling a warzone. It was certainly an episode that has scarred the community deeply.

‘Seven families either have left or want to leave the area. They have uprooted their lives because of the mayhem you collectively unleashed.’

He said the riot initially involved cars being damaged, set on fire and rolled down the steep residential street in order to ‘whip up those present’.

The prosecution has previously detailed how some of the vehicles, including a black Vauxhall Astra and silver Ford Ka, were either bought or stolen specifically to be used in the ruckus.

Organisers had used social media to encourage hoards of people to attend to ‘light up Mayhill’.

Members of the public were intimidated and attacked, including resident of the street Adam Romain who had his car torched.

A brick was also thrown through his window while his wife and children were inside.

When police arrived on the scene they were met with aggression and pelted by missiles, including bottles, poles, bricks and garden furniture, before having to retreat to safety.

Around £23,000 of damage was caused and six officers were injured.

Judge Thomas added: ‘The death of a young man was shamelessly and cynically hijacked for the purposes of criminal mischief – not out of any respect for him or for his family.

‘The riot that ensued was not borne of discontent or of social grievance but by a desire for mass entertainment.’

The judge commended the officers involved in investigating the riot.

Keiron Argent, 18, of Glyndwr Place, Townhill, was given three years and two months; and Keiran Smith, 20, of Creidiol Road, Mayhill was given four years.

All four will serve their time at a young offenders’ institute due to their age when the offences were committed.

A number of the defendants appeared via videolink from prison including Michael Parsons, 37, of Matthew Street, Dyfatty who was jailed for a further six years and three months.

Mitchell Meredith, 20, of Margaret Street, Port Tennant, who was called a ‘major rabble-rouser’ was sentenced at the same time for domestic violence charges against his former girlfriend and given six years in prison and a five-year restraining order.

Kian Hurley, 24, of Waun Wen Road, Mayhill, was sentenced to six years and nine months after his version of events was rejected at a Newton Hearing.

A number of young defendants will be sentenced in court later today.