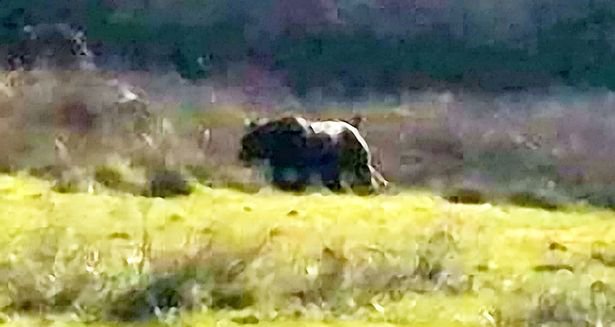 More people could come face to face with ‘harmless’ big cats in the British countryside as they have apparently become bolder after lockdown, an expert has claimed.

Sightings of the predators continue to be reported across the country, with the cats said to be scavenging for food ‘like foxes’.

A man recently described his unusual encounter with a ‘sand-coloured big cat with black stripes and black-tipped ears’ during a short trip away in Devon.

But he is not the only one – a number of large felines have reportedly been seen across Gloucestershire and Somerset.

Frank Tunbridge, who studies big cats, told Gloucestershire Live they are ‘often seen closer to towns and villages’ and the massive deer population in the south-west is their main source of prey.

The 74-year-old has received dozens of emails and calls reporting big cat sightings across Gloucestershire and beyond. He believes the animals are now part of the ‘diverse exotic wildlife’.

He said: ‘To a large majority of the British public, the thought of big predatory cats similar in description to a black leopard or a puma stalking through our woods and fields is unbelievable.

‘Yet to a witness who has observed one of these elusive and stealthy creatures at close quarters, the experience is unforgettable and it lives with them forever.

‘The whole subject of ‘big cats’ living and thriving within the UK has been rolling on for decades now without a satisfactory conclusion, even though the evidence for their existence is overwhelming.

‘Facts such as confirmed DNA, deer killed and consumed in a certain way and big cat paw marks.’

But Mr Tunbridge stressed ‘there can be no doubt’ that over the years these animals have ended up in the wild after they were released or escaped from private collections.

Last year, a sighting of a big cat in north London sparked a police search to try and track it down.

While they are not native to England, the expert said they have now bred and spread covertly to become naturalised.

Mr Tunbridge added Somerset, along with a couple of other counties, have become a hotspot for reported sightings.

‘Many of these big cats are hybrids which are now breeding true to type,’ he said.

‘As many as 70% of reports I receive point to this fact in their description of the cat.’

Beaches packed with sunbathers as UK melts in 31C heat