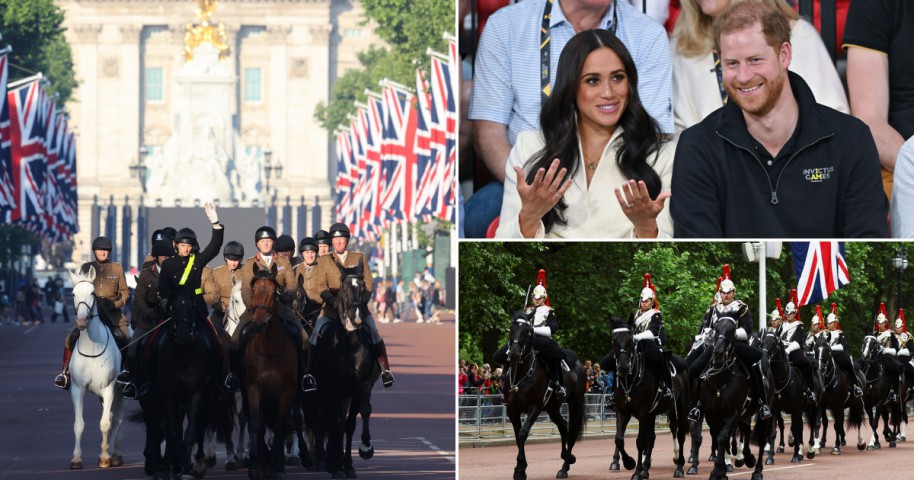 Prince Harry and Meghan are set for a huge family reunion today as they meet with senior royals together for the first time in two years.

The couple are expected to bring their children – Archie, who is three, and Lilibet, who is nearly one – along to Trooping the Colour today.

If so, it will be the first time Lilibet is introduced to her royal relatives. Archie has not been in the UK since he was six months old.

They are also likely to meet their cousins Prince George, Princess Charlotte and Prince Louis at last as part of the Queen’s Platinum Jubilee celebrations.

The ceremony of Trooping the Colour takes place every year to honour the Queen’s birthday, and has marked the official birthday of the British sovereign for more than 260 years.

But this year’s extra special parade will see the 1st Battalion, Irish Guards, and more than 1,200 officers and soldiers from the Household Division put on a display of military pageantry on Horse Guards Parade from 11am onwards.

The Duke and Duchess of Sussex have been invited by the Queen to watch the event from the Major General’s Office overlooking the parade in Whitehall.

They will join senior members of the Royal Family, but shamed Prince Andrew was reportedly not invited to the private viewing.

The room overlooks the entrance to Horse Guards and traditionally royals watch the parade from there is they are not taking part.

The Queen, Prince Charles, Prince William and Princess Anne will not be watching from the Major General’s Office as they will be carrying out royal duties.

Her Majesty will stay at Buckingham Palace, where she will take the returning cavalry’s salute from the balcony there.

Charles will be taking the salute as the Colour of the 1st Battalion Irish Guards is trooped, and will inspect the Troops of the Household Division on behalf of the monarch.

The Duke of Cambridge and the Princess Royal will join the Prince of Wales on horseback.

Most of the senior royals will travel to the event from the palace in carriages.

Harry and Meghan – who has not seen any of the family since quitting the Firm in early 2020 – will arrive by car.

The last public event the Sussexes attended together in the UK was the annual Commonwealth Day service at Westminster Abbey in March 2020, where there was a visibly awkward atmosphere.

But it is hoped any tension has been put behind them after the Queen sent a car and security to pick up the family from Farnborough Airport after they landed in the UK.

Her Majesty’s appearance on the royal balcony is one of the most keenly anticipated moments of the day.

But Harry, Meghan and Andrew are not expected to appear after the Queen limited the line-up to working royals only.

Revealed: How Prince William’s marriage could have changed monarchy forever