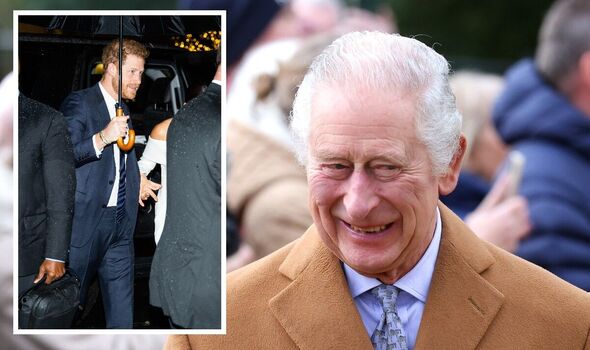 Prince Harry found the Scottish castle “complicated” and “easy” to get lost in and feared unintentionally walking into King Charles’ room while the King was doing “a handstand”, he shared in his memoir Spare. The Prince’s book was due to be published on January 10 but has been accidentally released in Spain.

On page 26 of the shocking memoir, Harry details getting lost in the “complicated” Scotland home where Queen Elizabeth regularly spent her Summer holidays and sadly died earlier this year.

Prince Harry said in a Spanish version of Spare seen by Express.co.uk: “I passed Victoria’s statue, things got complicated. The doors became identical, the rooms went into each other. It was easy to get lost.”

“Opening the wrong door carried the risk of bumping into father getting dressed with the assistance of his valet, or worse still, doing a handstand.

“Those exercises, recommended by the physiotherapist, were the only effective remedy for his constant neck and back pain.”

Harry goes on to explain that Charles suffered an “old injury” while playing polo.

He added Charles would do the strange exercises daily while dressed in just his underwear.

The property is located in Aberdeenshire, near the village Crathie, only a short drive from Ballater.

In the past, the late Queen gave the public a glimpse into the living quarters of the castle when she welcomed the short-lived Prime Minister Liz Truss inside to welcome her as Prime Minister.

The property has white walls, decorated with gold framed mirrors, grand old clocks and candelabras above an enormous elegant fireplace.

Princess Eugenie said of Balmoral: “Walks, picnics, dogs – a lot of dogs, there’s always dogs – and people coming in and out all the time.

“It’s a lovely base for granny and grandpa, for us to come and see them up there; where you just have room to breathe and run.”

Prior to the official release of Harry’s memoir, royal experts have suggested that hist “unflinching honesty” could hurt other members of the Royal Family, including the much loved Princess Kate.

Columnist Daniela Elser wrote on News.com.au: “Reporting out of London earlier this week revealed that, according to ‘a source with knowledge’ of Spare, it is the elder prince who is painted in the harshest light.”

“‘It’s tough on William, in particular, and even Kate gets a bit of a broadside,’ the source said. ‘There are these minute details, and a description of the fight between the brothers. I personally can’t see how Harry and William will be able to reconcile after this.'”

“For Kate, right now, watching her formerly close brother-in-law on the cusp of yet another offensive, and with not only her husband reportedly in his sights but her too, must be a particularly hard experience, not least because there is nothing they can do.”

Lisa Nandy defeated after admitting Labour has ‘moved away from people’