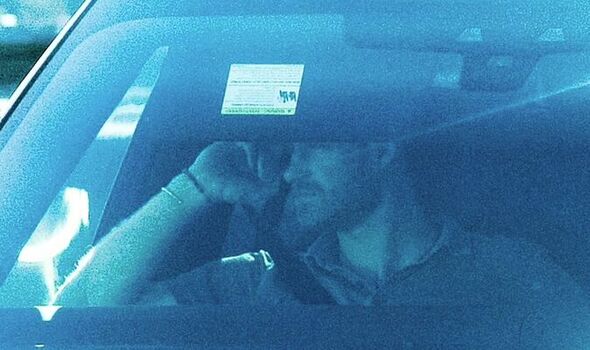 The estranged Prince appears pensive in new photos showing he and Meghan Markle as they arrived back in Santa Barbara at 6pm yesterday (2am this morning UK time).

The couple left with little fanfare, having only attended one major event this weekend.

They were cheered as they arrived at the St Paul’s Thanksgiving service.

They also reportedly held a birthday party for their one year old daughter, Lilibet.

The couple were rarely seen throughout the Platinum Jubilee, and according to reports the Sussexes and their two children, Archie, 3, and Lilibet, 1, were already flying home before the Jubilee Pageant began on Sunday afternoon.

The pageant celebrated Britain across the decades of the Queen’s 70-year reign including buses for each decade, ‘Dames in Jags’ which featured the likes of Shirley Ballas and Prue Leith being escorted in Jaguars down the mall and a procession of puppet corgis.

It is believed that Meghan and Harry had set off from Frogmore Cottage, where they spent the Jubilee weekend at 1:30pm to be driven to Farnborough Airport.

An insider told The Sun: “There was no fanfare, they just went.

“They didn’t stick around for the Platinum Jubilee pageant which is a celebration of Britain and all of its quirks and eccentricities over the Queen’s 70-year reign.”

‘We cannot have interference!’ Ann Widdecombe warns ECHR to stand down on UK migration law