Prince Harry snubbed dinner with Prince Charles and Prince William after Meghan Markle was banned from joining the royals at Balmoral the day the Queen died, it has been claimed. The Duke of Sussex reportedly insisted his wife join him on September 8 as the Queen’s health deteriorated and members of the Royal Family rushed north of the border to be at her side. But Charles is said to have told Harry it was “not appropriate” for Meghan to come.

The row reportedly led to the Duke of Sussex missing an RAF flight to Scotland with his older brother, Prince Andrew and Prince Edward.

Harry eventually travelled to Aberdeen without Meghan, touching down minutes after the Queen’s death was announced.

A source said that when the Duke of Sussex arrived at Balmoral he was “so furious” he refused to have dinner with Charles, Camilla and William. 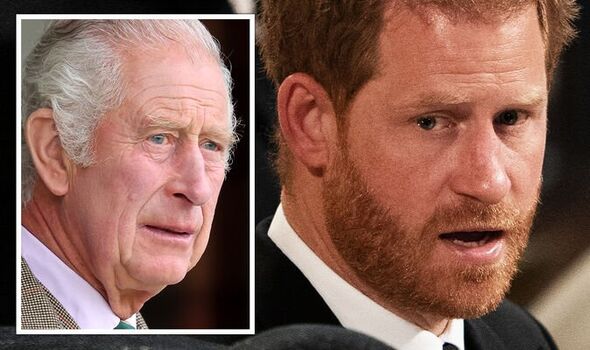 He reportedly ate with the Earl and Countess of Wessex and the Duke of York instead, before being the first royal to leave in the morning.

The insider told The Sun: “Harry was so busy trying to get Meghan to Balmoral and rowing with his family that he missed the flight.

“Charles has an open invitation for Harry to dine with him whenever he is in the country.

“But Harry was so furious that he refused to eat with his father and brother.

“It was a massive snub. And he got out of Balmoral at the earliest opportunity to catch the first commercial flight back to London.”

Harry and Meghan, who are living in California after quitting royal duties, were already in the UK as part of a trip to Europe the day the Queen died peacefully at her private residence in the Scottish Highlands.

The Duke of Sussex was among royals who made the journey to be at her bedside, while Charles and Princess Anne were already in Scotland.

The Duchess of Sussex remained at Frogmore Cottage, while Kate also stayed in Windsor with her and William’s three children.

It comes as Harry and Meghan have faced ongoing tensions with the royals amid the Megxit fallout.

The Duke of Sussex has been embroiled in rifts with Charles and William.

However they have put on a show of unity in their grief for the late Queen.

Express.co.uk has contacted representatives for the Duke for comment.