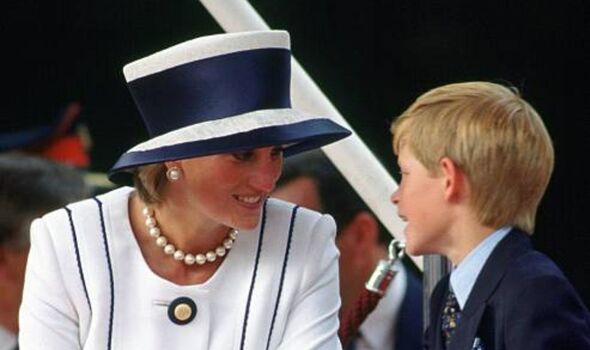 Prince Harry has detailed how he struggled to cry over the death of his mother Princess Diana in a new interview in the US. The Duke, 38, said he watched videos of her online to try and force the tears to come – and admitted to using substances to numb the pain.

Harry confessed in his book to using cocaine, magic mushrooms and cannabis when he was young.

He said that by the time he was in his late twenties he felt “hopeless” and “lost”.

He told Mr Cooper: “There was this weight on my chest that I felt for so many years that I was never able to cry.

“So I was constantly trying to find a way to cry, but – in even sitting on my sofa and going over as many memories as I could muster up about my mum.

“And sometimes I watched videos online.”

Harry said he cried only once following Diana’s death – when her coffin went into the ground.

Since then the prince has sought help from a therapist, who he began seeing seven years ago.

He has also admitted to trying more experimental therapies such as ayahuasca, psychedelics, psilocybin and mushrooms.

Harry told Mr Cooper: “I would never recommend people to do this recreationally.

“But doing it with the right people if you are suffering from a huge amount of loss, grief or trauma, then these things have a way of working as a medicine.”

When asked what the drugs showed him he replied: “For me, they cleared the windscreen, the windshield the misery of loss.

“They cleared away this idea that I had in my head that– that my mother, that I needed to cry to prove to my mother that I missed her.

“When in fact, all she wanted was for me to be happy.”

He says he has now found happiness in his personal life through his life in California with his wife Meghan and their children Archie and Lilibet.