The TalkRADIO host asked Mr Grieve if he would give the Prime Minister his support if either Labour or the 1922 Conservative Committee called for a vote of no confidence in the Prime Minister over her failure to deliver on the Brexit vote. But as the Tory Remainer claimed he had “no desire to get rid of the Prime Minister”, Julia Hartley-Brewer promptly responded: “Because she’s doing a good job for Remain?”

The Conservative backbencher argued he could not imagine anyone else doing a “better” job than the Prime Minister in her shoes.

He said: “I think she’s doing the best she can in extremely difficult circumstances.

“I happen to have quite serious disagreements with some of the areas of approach she’s adopted.

“But somebody would have to persuade me that there’s somebody else who’s going to do better.” 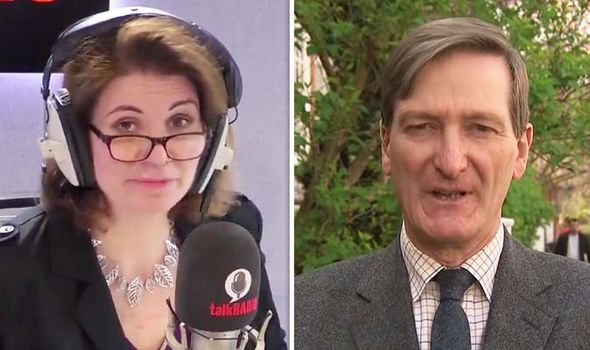 The Prime Minister pledged she would resign from her seat if her deal was approved by MPs in the Commons last month.

But after a third defeat on her Brexit withdrawal agreement Mrs May reached out to Labour leader Jeremy Corbyn to come to a cross-party solution to the Brexit impasse.

As Government talks with Labour on EU withdrawal went into another day, the issue of a new Brexit referendum continued to be a focus of attention.

Ministers have considered the possibility of giving MPs a vote on holding a referendum on a deal as part of the talks with Labour, the Daily Telegraph reported.

It is understood the Government could set out proposals to Labour leader Jeremy Corbyn in a letter on Friday.

And Mrs May faced a continued challenge to her authority from Parliament as the House of Lords debated a Bill aimed at extending the Brexit process in a bid to avoid a no-deal scenario.

The remaining stages of the European Union Withdrawal (Number Five) Bill will be considered by peers on Monday, threatening a new political headache for the Prime Minister if it is approved.

On Friday, Mrs May requested a further short extension to the Brexit process until June 30 in a letter to European Council President Donald Tusk.