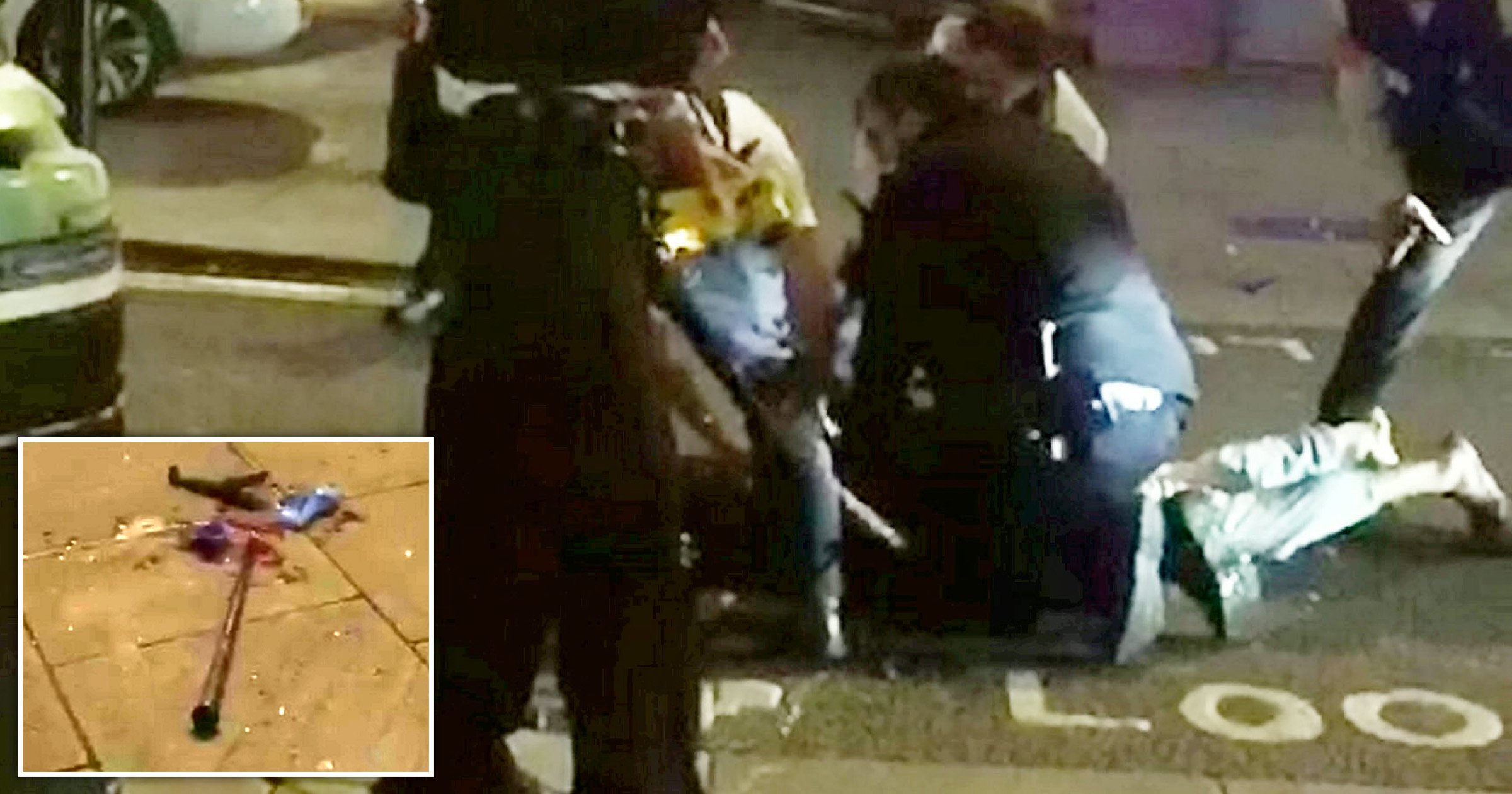 A passer-by appeared to try and stop a man from attacking police officers by throwing a bike at him.

Two police officers were stabbed in Leicester Square, central London, at around 6am yesterday.

Footage after this shows a man was surrounded by six police officers who tried to control him with batons and warned him to ‘stay where you are’ after they pushed him to the ground.

He was Tasered which had little effect, then he got up and started throwing his hands around and attempting to punch any officer in his path.

The video shows the moment a member of the public then threw a bike into his path to stop the attack.

A young female police officer suffered a serious stab wound to her arm and another male officer was stabbed three times in the neck and once in the chest.

The injured officers were taken to hospital although their injuries are not life-threatening, the Metropolitan Police said.

They said the incident is not believed to be terror-related.

A man believed to be aged in his 20s has been arrested on suspicion of grievous bodily harm and assaulting an emergency services worker.

Metro.co.uk has contacted the Metropolitan Police for an update about the arrest of the suspect.

A long-handled bloody weapon was seen lying on the pavement following the attack.

He said: ‘It was very disturbing.

‘I was just out on a job heading to pick someone up at Heathrow Airport. First of all I saw this female officer appear from around the corner with blood on her arm.

‘Then these two male officers came around the corner.

‘More police officers appeared from McDonald’s. They surrounded the guy and tasered him like five times because he had a knife.’

Witnesses said the suspect had been wandering around the area before the attack with no shoes or socks on.

Another passer-by added how the suspect brandished a long weapon with a blade and used this weapon to stab the female police officer.

They added a second weapon – a silver knife from inside the suspect’s trousers – was used to stab the male police officer.

The Met Police said: ‘On Friday, September 16 at around 6am police encountered a male with a knife in the area of Leicester Square.

‘Two officers received stab wounds and are currently being treated in hospital. We await further updates on their conditions.

‘Taser was deployed and male was arrested on suspicion of grievous bodily harm and assaulting an emergency worker.

‘He was taken to a hospital for treatment where he remains at this time.

‘Enquiries into the circumstances surrounding the incident are ongoing.’

The four ways Boris Johnson could be ousted as PM