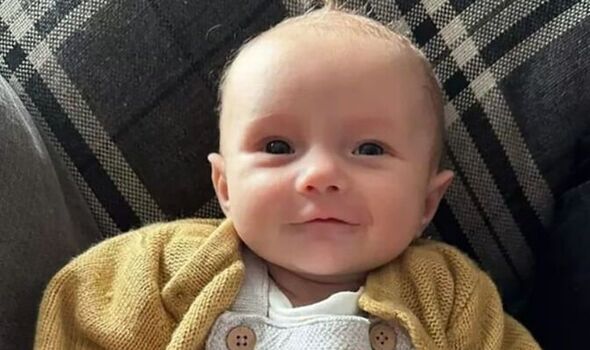 An “absolutely beautiful” baby died in his sleep at just 10 weeks old.

Kai O’Hagan’s devastated mother Kelly, 39, said it feels like the tot has “just been snatched away” from the family after she and partner Darren Johns, 40, woke to find him lifeless.

The baby had stopped breathing during his sleep at the family home in Cross Gates, Leeds, but the cause of his death is still unknown.

Speaking to the publication, the mum of three said: “He didn’t cry a lot, he was so pleasant. He had big brown eyes, he was just absolutely beautiful. He was always smiling.

“It feels like he’s just been snatched away from us.”

The previous day, Kai, who was described as being perfectly fine, was laughing and playing with his two young brothers at their home.

Darren gave the newborn his nightly feed at 2am and put him down in the pram as he slept alongside him downstairs.

The little boy fell asleep and when Darren woke up at around 6am, when Kai usually wakes up crying, he was quiet and still asleep but he knew something was wrong.

He shouted for Kelly, who doesn’t do the night feed to due taking drowsy anxiety medication, to come downstairs. She could tell “straight away” he wasn’t breathing.

Kai was given CPR by the paramedics and was rushed to hospital but nothing could be done to save his life. Despite various tests being conducted, the cause of his death is still unknown. The family is now pushing for answers.

“We’re struggling to get our heads around it,” Kelly continued.

“We had only just registered him on Monday and then on Sunday he died in the same week as registering him. We just can’t get our heads around it, it’s strange not having him here.

“He just didn’t wake up. My partner came and got me. I take medicine for anxiety which makes me sleepy which is why Darren does the night feeds. He fed him at 2am.

“He woke up at 6.30am. He’s used to Kai waking up around that time but he wasn’t awake. He shouted at me to come downstairs. Something wasn’t right, I knew right away. He just wasn’t breathing.

“It seems he went in his sleep, if he had cried, everyone would have heard him cry.

“The day before he was on the sofa with his brothers, we just can’t get our heads around why it’s happened we’re trying to get answers.”

Kai’s aunt Stephanie Haye has set up a crowdfunding page to help raise money to give the little boy the best send off they can and take the financial pressure off his parents.

Kelly added: “You never think you’re going to have to plan something like this for your child. We do just want to give him the best send off for our little boy.”

His aunties Keeley and Stephanie and James, added: “Baby Kai, your beautiful smile and big brown eyes and your loving heart will always remain with us forever. We love you lots.”

Not free in US! Meghan and Harry told they can’t keep Archie and Lili ‘cooped up forever’