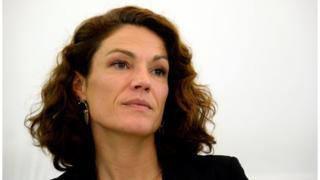 Days before France launches a national debate in response to weeks of protests by “gilets jaunes” (yellow vests), the former minister picked to lead the exercise has stepped down.

The protests began in reaction to a fuel tax rise, but then embraced broad anger at the cost of living.

The big debate on living standards was announced in a series of concessions.

The timing of Ms Jouanno’s departure is being seen as a blow to President Emmanuel Macron as he makes final preparations for the debate, due to kick off on 15 January.

She resigned on national TV on Tuesday evening, saying she was doing so because she believed in the debate.

In an attempt to end the protests, Mr Macron said last month that the debate should be held publicly in town halls across France and focus on key questions:

But political opponents and some protesters objected to Ms Jouanno being paid so much as head of the national public debate commission, calling it indecent.

One left-wing union veteran, Gérard Filoche, said he had been conducting debates for decades and had never imagined that kind of money was possible.

Ms Jouanno earns only a few hundred euros less than the president, who pockets €15,140 a month. She will continue to lead the commission, but will not steer the national debate.

Although the scale of protests is far below its peak in November, some 50,000 people turned out across France last Saturday for an eighth weekend of action.

There were also outbreaks of violence.

A forklift truck was smashed through the gates of a ministry in Paris, and an ex-boxer was filmed punching police on a bridge in the centre of the capital.

Christophe Dettinger, who is now a public servant, was due to appear in court later on Wednesday.

After a succession of polls showing a decline in his popularity, President Macron’s ratings have recently gone up, the latest survey says.

Approval for him went up five points to 28% in January, according to an Ifop-Fiducial poll taken before Saturday’s protests.