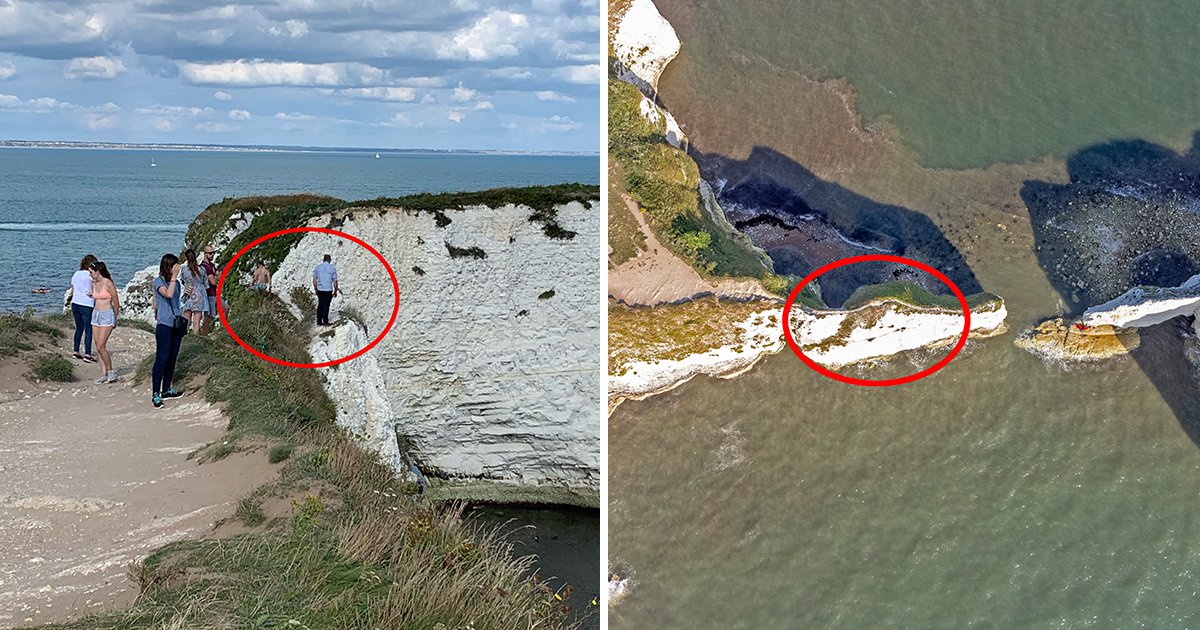 Two tourists were spotted mere inches away from death as they got slightly too close for comfort to the edge of a coastal cliff.

The men were seen teetering along the chalk cliffs at Old Harry Rocks, near Swanage in Dorset, which have a 120ft drop down to a rocky beach.

They appeared to have strayed off the designated coastal path to take a look at the view from the sheer height.

The area’s coastguard warned against this risky behaviour, especially because the cliffs can be slippery, crumbly and insecure in places.

A spokesperson said: ‘It is really disappointing that someone has done this despite all the signs and warnings about the dangers there.

‘The rocks here are very loose and crumbly – we have a real problem with erosion there because of footfall, so it is concerning seeing people get so close to the edge.

‘If this behaviour continues we are going to see a serious injury or a death.

‘I just don’t understand why people are putting themselves at risk. These cliffs are very loose and it only takes a small slip for you to go over the edge. It just isn’t worth the risk.

‘On average there are one or two incidents of people falling at that exact location every year. A man almost died at there in May.

‘The cliffs may look beautiful but they are very dangerous.

‘People need to keep a distance from them, both at the top and at the bottom because of rock falls.’

Social media users criticised the tourists, describing them as ‘stupid and irresponsible’ and ‘flipping bonkers’.

One person said: ‘It’s like they come down here and leave their brains behind.’

It comes after a 28-year-old man miraculously survived a fall off the same stretch of coastline in May this year.

The tide was in at the time and the man was somehow saved by landing in around 4ft of sea water.

A group of kayakers saw what happened and paddled towards him, helping him onto the shore at the foot of the cliff to give him first aid.

He was conscious, but suffered a punctured lung and several fractured ribs. Lifeboat staff said they ‘honestly don’t know how he is still alive today’ after the fall.