Heathrow Airport has lit up one of its terminals with a massive Union Jack flag covering an entire ceiling. Britons have reacted to the flag in their hundreds with many loving the design, but some have slammed it as “a bit OTT”.

ITV Royal Editor Chris Ship tweeted a picture of the red, white and blue Heathrow terminal this morning and simply captioned it: “Like it @HeathrowAirport.”

Several users replied how much they loved the patriotic design. One replied: “Wow! Me too,” another said: “Pretty smart I like that.”

A third joked: “I would like to see Sturgeon walking this.” And another commented: “If one is in a daze from travel, it is a great way to tell them where they are.” 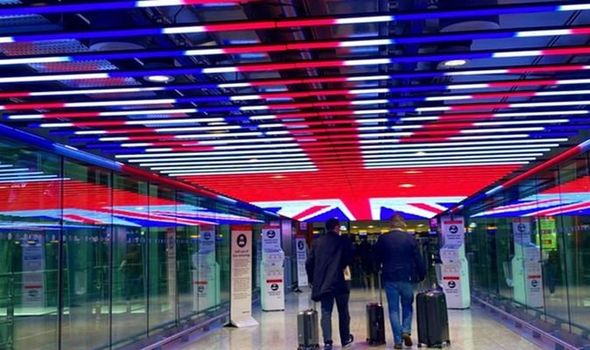 One person criticised the illumination, saying: “It would have been a much cooler design if they had only used one half of the flag and let the reflections do the rest.”

Another echoed: “Yeah, but it’s upside down” and another bemoaned that there are “not enough actual flags.”

And one woman thought it was “migraine inducing” and a “Bit OTT!”

It comes as more countries have been added to the travel green list. Countries on the green list are the only places the government currently permits travelling to on holiday.

Reviews are expected to be made every three weeks, so the next one will presumably be announced on July 15 unless the government call for an earlier one.

Prince Philip to the rescue: How Philip comforted the Queen on hardest day of her life