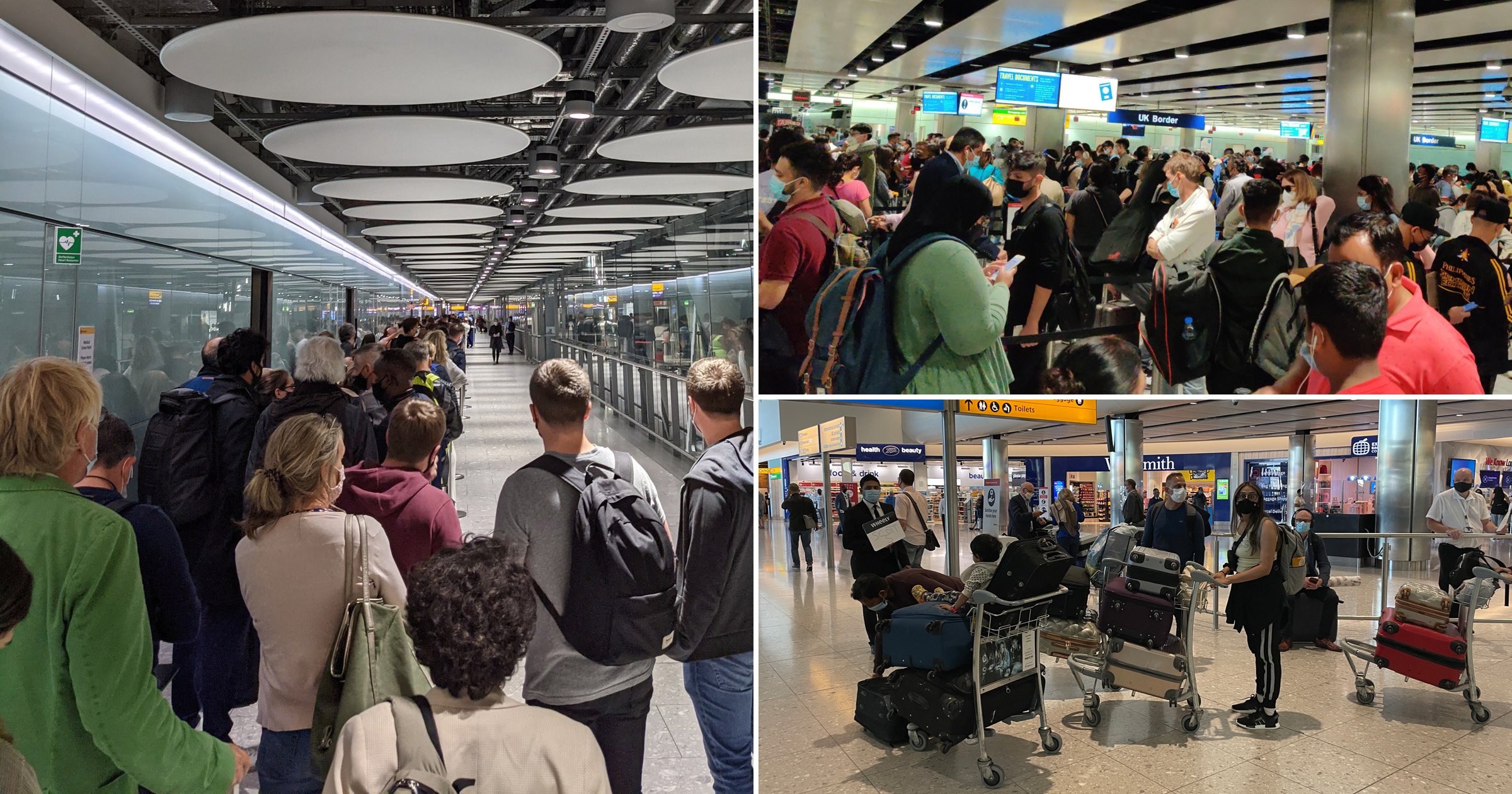 Passengers have complained of snaking queues and confusing new measures at Heathrow for the twelfth day in a row.

Pictures posted by fed-up travellers show large crowds waiting to be processed at the border, with some claiming to have been kept there for up to three hours.

Travellers also took to Twitter to complain of delays at departure gates and baggage collection points.

Holidaymaker Lucy Jane Atkinson said: ‘Feels like everyone at Heathrow is moving in slow motion.

‘I got here at 1:30 for my 4pm flight, and have only JUST got through security. Really wasn’t expecting to have to run for this plane.’

Delays in both directions have previously been blamed on shortage of staff as some officials were pinged for self-isolation.

The government is only now moving to scrap the requirement for double-jabbed travellers to take a £70-plus PCR test, according to The Times – weeks after countries including Germany and France made the same move.

Recent weeks have also seen an explosion in the variety of Covid testing requirements holidaymakers need to show when going abroad.

Although quarantine rules for arrivals into the UK are broken into three categories, the rules for people departing often differ between destinations even if they have similar risk levels.

Earlier this week, senior Tory backbenchers called for Border Force representatives to be hauled before MPs to find a way to fix the ‘complete carnage’.

Former Tory leader Sir Iain Duncan-Smith told MailOnline: ‘They are running a public service and they should be open to the public.

‘Number one they’ve got to explain what the problem is and why they weren’t able to cope. Then we can work out what to do about it.’

Meanwhile, an investigation by Which? exposed faulty guidance being handed out to customers, thought to have contributed to hold-ups at boarding gates.

Undercover researchers were given confusing or incorrect information in seven of 15 telephone calls made to British Airways, easyJet, Jet2, Ryanair and Tui, according to the magazine.

Posing as travellers, they phoned the firms’ customer service lines three times each and asked the same four questions about requirements when flying to Portugal.

Two Tui agents and one BA agent told the researchers vaccinated travellers did not need to take a test before flying, while another BA rep said children under four were exempt from testing.

The information was all incorrect at the time, and would have resulted in passengers being denied boarding.

A researcher was also told by a BA rep they did not need to bring paperwork with them if they uploaded their test data to BA in advance, which would likely have seen them turned away upon arrival at their destination country.

A spokesperson for the Home Office said: ‘Throughout the pandemic we have been clear that queue times may be longer as we ensure all passengers are compliant with the health measures put in place to keep the UK public safe.

‘This weekend was the busiest of the year for returning passengers, with particularly high numbers of families with children under the age of 12 who cannot use e-gates.

‘We have endeavoured to improve waiting times this week, for example by flexibly deploying staff across Heathrow Airport and continue to work closely with all airports and airlines to make sure all passengers can have a safe and hassle-free journey.’

British Airways said the issues raised by Which? were not ‘representatives of the hundreds of thousands [of calls] were handle] but said they would remind agents to refer customers to the government’s official guidance.

Jet2 said they ‘provide consistent messaging for our teams to use, alongside regular training’ but ‘will take steps to address this feedback’, while easyJet said it is ‘ultimately [customers’] responsibility to ensure they meet entry requirements’ by checking local government requirements.

Tui said it was providing ‘extra training’ to support queries. A Ryanair spokesperson described Which?’s report as ‘fake news’ and said requirements were all emailed to customers prior to travel.