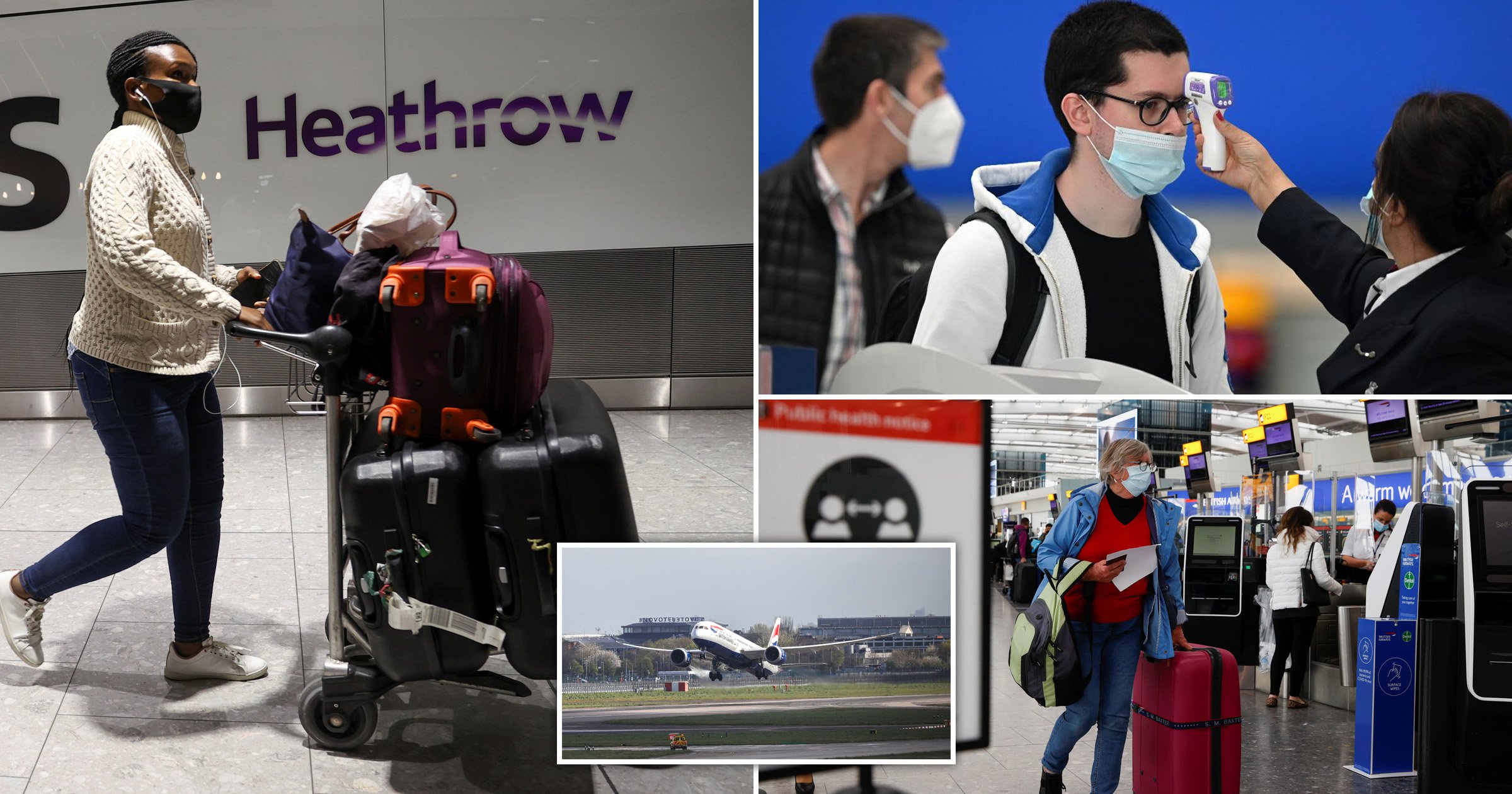 A dedicated terminal for people flying to the UK from Covid-ravaged countries has opened at Heathrow Airport.

From 4am on Tuesday, arrivals from the high risk red-list will be directed through terminal three of the busy airport in London.

It comes after passengers complained about an ‘appalling’ lack of social distancing and mixing between red and amber list passengers.

Arrivals at Heathrow told Metro.co.uk how they were crammed ‘like sardines’ as huge queues formed at Border Control.

Anyone who has been in one of the 43 countries on the red list must pay for a hotel quarantine for 10 days.

A spokesperson for the airport said: ‘Red list routes will likely be a feature of UK travel for the foreseeable future as countries vaccinate their populations at different rates.

‘We’re adapting Heathrow to this longer-term reality by initially opening a dedicated arrivals facility in Terminal 3 from June 1 for red list passengers arriving on direct flights.’

Today is the first time Terminal 3 has been used since April 2020, when it was closed to save costs amid the collapse in demand for travel.

Heathrow said that its dedicated arrivals site would switch to Terminal 4, which was also closed in December, ‘as soon as operationally possible’.

The spokeswoman said that while opening the facility would be ‘logistically very challenging’, the airport hoped that doing so would enable Border Force to carry out its duties more efficiently, as passenger volumes increase in line with countries on the government’s green list.

Just 12 countries are on the green list of travel destinations that don’t require any isolation period on returning to the UK.

The government is advising against travel to amber destinations, though it is not illegal and many holiday companies are still offering trips to them.

Heathrow is the only airport in the UK which has dedicated a terminal to red list arrivals. Other busy airports have no direct red list flights coming in at this time, meaning similar measures would not be necessary.

The Home Office told the BBC that Border Force has mobilised additional staff to help minimise queuing times for passengers, and that it is making sure that it has the right level of resources to maintain border security as international travel begins to open.

However, the Public and Commercial Services Union (PCS) has said Border Force members are ‘very concerned’ about the health and safety issues arising from the decision to open up Terminal Three as a dedicated red list terminal.

A PCS spokesman said the decision was taken at ‘extremely short notice’ meaning ‘key social distancing procedures are not in place’.

He added: ‘This is another poorly planned initiative that will be understaffed and rely on volunteers to do overtime, to avoid mounting queues.’

Heathrow said its top priority was protecting the public and helping reduce the risk of new variants. The airport insisted there were ‘several layers of protection to keep passengers and colleagues safe’, such as mandatory testing for all arrivals, segregation and ventilation.

It comes as a scientist advising the government warned of signs the country is in the early stages of a third wave of coronavirus infections and the June 21st reopening should be pushed back.

A government spokeswoman emphasised the UK’s top priority was protecting the health of the public, using an enhanced borders regime to reduce the risk of new variants being transmitted.

‘As we reopen international travel safely, we will maintain 100% health checks at the border and the new dedicated terminal at Heathrow for arrivals from red list countries will enable passengers to be processed as safely and as efficiently as possible, before being transferred to a managed quarantine facility,’ she said.

‘We continue to do all we can to smooth the process, including the roll-out of our e-gate upgrade programme during the summer and deploying additional Border Force officers.’

Queen’s Platinum Jubilee: Where will the Royals be over the bank holiday?

Rural housing crisis: ‘It’s impossible to get on the property ladder’