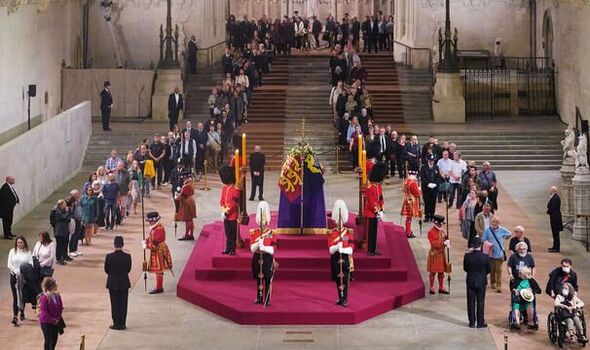 With the strain of the last few days etched on their faces, the King and his family took part in a poignant religious ceremony led by the Archbishop of Canterbury to mark the start of the late monarch’s lying in state at cavernous, historic Westminster Hall.

There were 65 members of the extended Windsor clan gathered in the ancient venue, built in 1097 by William II and the last surviving part of the Palace of Westminster, to mark the formal handover of the Queen’s body to the country for the period until the end of her funeral next Monday.

It was too much for some. The Duchess of Sussex, looking nervous and deeply uncomfortable at times, was separated by the Countess of Wessex from the Queen Consort and the Princess of Wales in a line-up of royal partners waiting mostly in silence for the arrival of the coffin procession.

Emerging at the end of the ­service, Meghan held hands with husband Prince Harry, both seeking and giving comfort and solace.

One mourner, thought to be a member of the extended family, collapsed during the 20-minute ­service, while the Earl and Countess of Wessex’s daughter, Lady Louise Windsor, 18, struggled with her emotions, wiping away tears for her beloved granny with a handkerchief.

Camilla, Kate, and Sophie looked drawn and drained by the past few days. 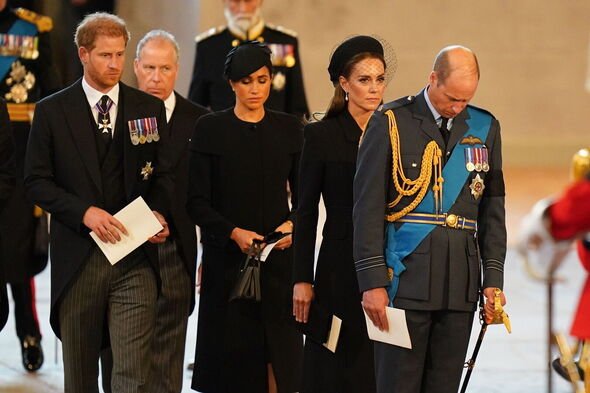 As muffled bells tolled and the sound of a military band heralded the impending arrival of the coffin procession, they and Meghan waited tensely before joining their husbands in the procession when the Queen’s coffin, borne by ­pallbearers, was brought into the medieval hall.

With the King and Queen Consort at the front, the royal party stood to attention in solemn tribute behind the casket as it was raised by the pallbearers on to a purple-clothed catafalque – a ­decorated wooden framework – placed on a scarlet platform flanked by a tall, flickering candle at each of its four corners.

At the other end of the hall, 140 MPs, including Prime Minister Liz Truss and Labour leader Sir Keir Starmer and 140 peers watched in silence as the choirs of Westminster Abbey and the Chapel Royal at St James’s Palace sang Psalm 139: “O Lord, thou hast searched me out, and known me.” 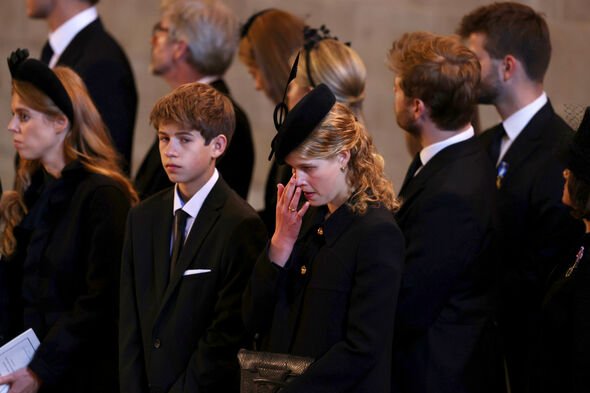 It was a favourite of the deeply religious sovereign, who had been consulted about every aspect of yesterday’s service.

On one side of the King and his immediate family, senior royal aides stood to attention with some of the Queen’s closest servants.

They included her two favourite pages, “Tall” Paul Whybrew – who featured in her film scene with Daniel Craig as James Bond for the London 2012 Olympics – and Serjeant-at-Arms Barry Mitford.

Both were with her at Balmoral in her final days. Across the hall on the other side towards the back stood seven of the Queen’s ladies-in-waiting, dressed in black.

They included Lady Susan Hussey and Mary Morrison, who both served the monarch since 1960, as well as Lady Elton, Lady Elizabeth Leeming, Jennifer Gordon-Lennox, Philippa de Pass, and Dame Annabel Whitehead. As the choir sang, guardsmen lifted the coffin, draped in the royal standard with the imperial state crown and white flowers on top, into place on the catafalque.

Major Johnny Hathaway-White of the Grenadier Guards helped to lay out the Queen’s Company Colours at its base.

Before the lying in state began the brief service for the reception of the coffin was performed with the entire congregation standing.

It was conducted by the Archbishop of Canterbury Justin Welby, who gave the opening prayer, and the Very Reverend Dr David Hoyle, Dean of Westminster.

The Archbishop of Canterbury said: “God, the maker and redeemer of all mankind: grant us, with thy servant Queen Elizabeth, and all the faithful departed, the sure benefits of thy Son’s saving passion and glorious resurrection; that in the last day, when all things are gathered up in Christ, we may with them enjoy the fullness of thy promises; through Jesus Christ our Lord. Amen.” 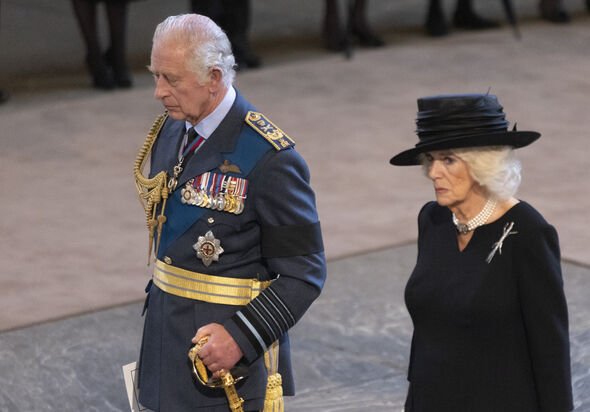 At the end of the ceremony the first vigil around the coffin was mounted by four officers from the Household Division – two each from the Blues and Royals and Life Guards.

The royal party paid tribute to the Queen by bowing or curtseying before filing out in procession, ­followed by the extended family.

In full military regalia, the Duke of Kent, 86, bravely struggled to march out, watched anxiously by the Duke of Gloucester.

They were also accompanied by Prince Michael of Kent whose wife Princess Michael was helped out on crutches by her son Lord Frederick Windsor and his actress wife Sophie Winkleman.

It was a sorrowful afternoon for the family but the King and Queen Consort have the chance for a brief respite away from the cameras ahead of the state funeral.

They flew by helicopter to Wiltshire. Camilla went to Raymill House, her country retreat in Lacock, while the King was understood to have driven to Highgrove House in Gloucestershire.

Body of teenager discovered on ‘wasteland’ near town centre