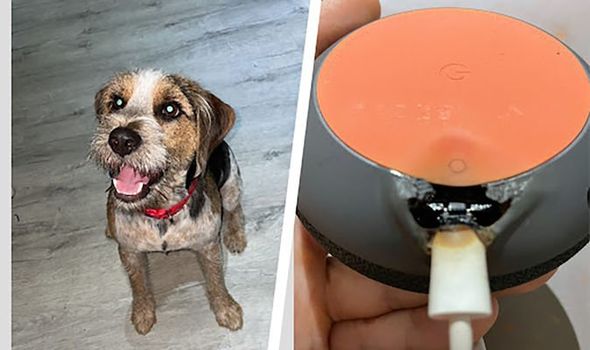 Max, a beagle cross, alerted his owners to the family’s Google home hub when it began smoking in the middle of the night. Andy Smith, from Nuneaton, Warwickshire, was woken in the early hours by the 15-month-old pup.

Thinking the dog must need the toilet, he headed downstairs at around 4.30am when he discovered something wasn’t right.

He was greeted with the smell of burning plastic and noticed his Google home hub was sizzling on his home bar, Coventry Live reports.

He said: “In the early hours, about half past four in the morning, the dog came into our room and we thought he needed a wee.

“So I came down and I noticed a burning plastic smell and it was coming from the Google ‑ it had all started to smoke and melt.

“It was on a leather fire retardant surround on the bar and it had burned through that. At that point there was no fire, but if Max hadn’t woken us up when he did there probably would have been.”

He said a two month wrangle with Google followed.

He explained: “I contacted Google the next day. It was a nightmare. They asked me to send it back which I did. To start with they lost it once it got to the factory. I chased them up dozens of times, over seven or eight weeks.

“After they managed to find it they eventually got back to me and said their engineers had looked at it and decided it was an external issue, nothing to do with Google.

“They were basically blaming me ‑ but it had been sat in the same spot on my bar for 18 months. So I asked to see the engineers report but they refused.

“They sent me a replacement one but it’s still wrapped in the box ‑ I don’t trust them now. Their customer service has been shocking. Eight weeks of me chasing them just for them to blame me in the end.”

“If Max had not woken us it could have led to a fire and everything would have been different,” Andy said. “He got spoiled by the missus the next day ‑ treats, walks, the lot ‑ he thought it was Christmas!”

CoventryLive said it has approached Google for a comment.

Prince Andrew Gets Candid, and Britain Is Appalled