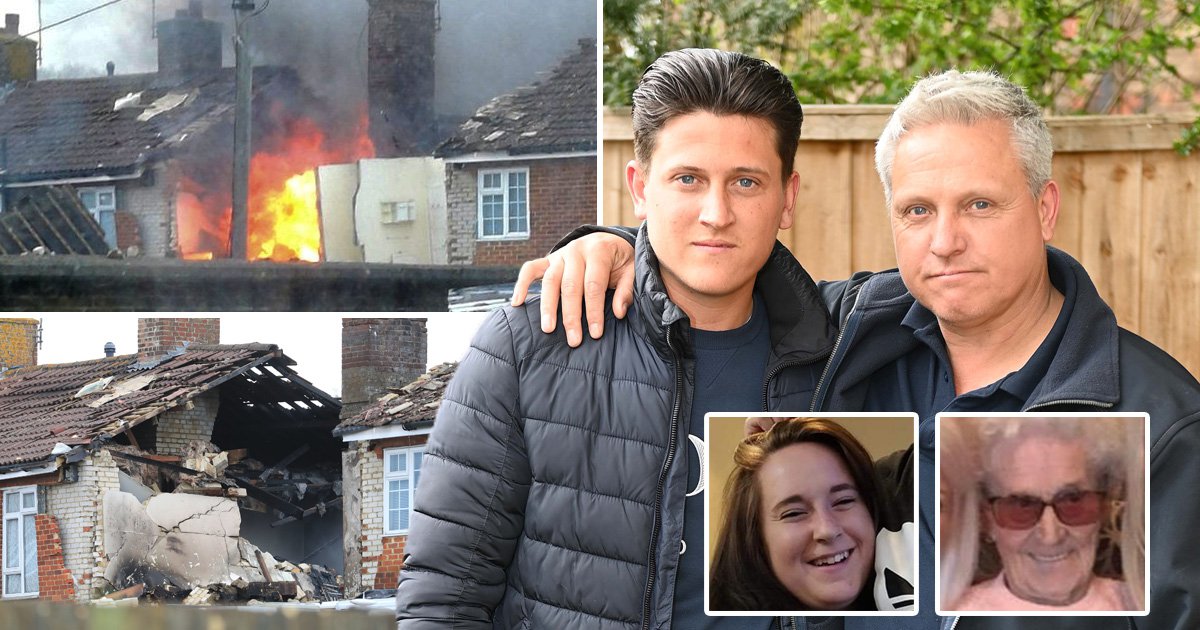 A hero father and son saved the lives of three people when they raced into a burning row of houses seconds after a gas explosion.

Andy and Harry Hodges braved fire and smoke to save Ethel Hanford, 99, and her 75-year-old son Donald before going next door and helping 22-year-old Shannon Pankhurst to safety.

The construction workers were driving past the houses in Ashford, Kent, just after 8am when they witnessed the aftermath of the blast, which saw two people airlifted to hospital and a further five hurt.

Harry, 22, said ‘instinct took over’ as the pair immediately got out the car and waded through the wreckage to look for survivors.

He told Mailonline: ‘Everything happened in a bit of blur. We ran into the wreckage of the house and there was a man in his 70s wandering around what was left of the hallway. He was shocked and confused but didn’t appear to be too badly hurt. He said his mother was in the dining area.

‘We went in and found an elderly lady sitting down. Part of her hair had been singed and she had quite a nasty cut on her head. The force of the blast had blown bits of carpet up onto her face.

‘She kept asking us not to lift her up but we said we had to as we couldn’t keep her where she was because there was a fire. The smell of gas was very strong.

‘I helped the man outside while my dad carefully hoisted the elderly lady over his shoulder in a fireman’s lift and took her to the front of the house. I then took her and guided her to a patch of grass where her son was.’ 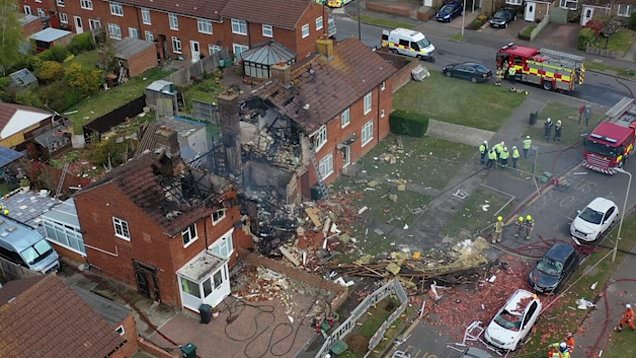 After hoisting the Hanfords to safety, the pair heard cries for help coming from the neighbouring house.

Andy, 53, ‘kicked the door down’ to find Shannon – an old school friend of Harry’s – at the top of the stairs trying to reach her parents who were trapped in their bedroom.

At this point, part of the wall between the two houses had collapsed ‘and the fire was growing in intensity’.

Harry explained: ‘It became too much for us to do anything so we grabbed the girl, who I later found out was an old school mate, and got her outside to safety.

‘Fortunately as we came out, the firefighters were preparing to go in and we told them that there was a couple still trapped in an upstairs bedroom. They rescued the couple minutes later and brought them down, which was a huge relief.’

Modest Harry played down the suggestion he and his dad are heroes, insisting ‘we just did what needed to be done’.

He added: ‘The fire really took hold soon after we came out of the second house. Had we not been there a few minutes earlier, who knows what could have happened. I’m just glad we were driving past at the time.’

The pair were pictured heading out for a well-earned pint on Tuesday night and plan on sending Ethel, who Andy later realised is his friend’s wife’s nan, some flowers.

It is not clear what caused the blast, which completely destroyed one house and damaged others. 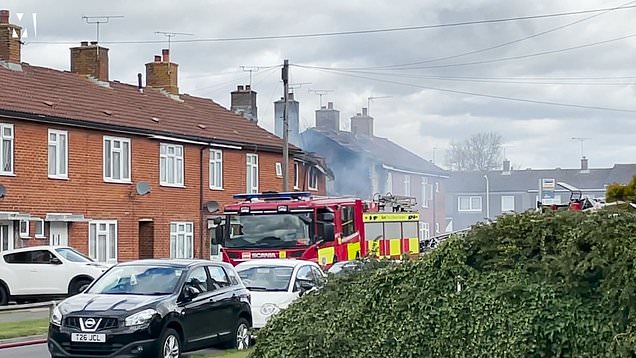 Locals said the explosion ‘shook’ the whole street just before 8am with one saying her house felt ‘like something had literally flown into the side of it’.

Residents were evacuated as seven fire engines raced to the scene.

Dramatic footage shows a huge blaze engulfing one house as officers attempt to keep bystanders back, while images show others fleeing the fire as neighbours wearing their pyjamas looked on.

Smoke can be seen billowing from the hollowed out home which was left with no walls and just the chimney remaining.

Earlier, an ambulance spokesman said: ‘We can confirm our attendance at an incident in Mill View, Willesborough, Ashford, following an explosion reported to us shortly before 8am today (4 May). Ambulance crews including our Hazardous Area Response Team (HART) have attended the scene along with police and fire colleagues. The air ambulance service also joined us at the scene.

‘We remain at the scene in support of our emergency service colleagues.’