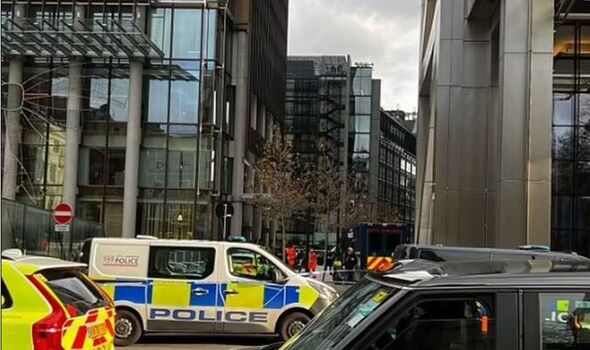 “Police arrived on scene at around 2pm.

“Cordons are currently in place and the public are urged to avoid the area if possible while emergency services remain in attendance.”

A London Ambulance Service spokesperson said: “We were called at 2.02pm today to reports of an incident on Bishopsgate, City of London.

“We sent a number of resources to the scene, including an ambulance crew, medics in two fast response cars and a clinical team leader.

“The incident is ongoing and we are working with our emergency service colleagues.”

Office workers and residents living nearby said the place had “gone into lockdown” as police responded to the incident.

Heron Tower is home to a number of companies, including restaurants Sushi Samba and Duck and Waffle.

A Twitter user who claimed to live on the 37th floor of the building said: “Someone jumped from Heron Tower.”

Meanwhile, other social media users reported that a Sushi Samba restaurant by the block was on “lockdown” and had been sealed off by police.

One person said: “We are on the 37th floor and some people up here saw them fall. Tragic.”