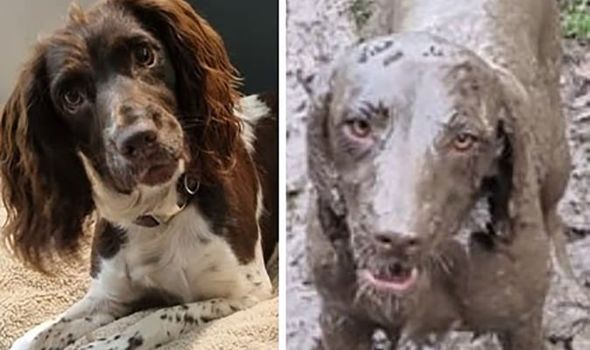 Sally was left unrecognisable as she covered herself head to toe in mud. But thankfully her owner Nicola Phillips saw the funny side, although she insisted the cheeky pup had a good swim before she was allowed back in the car.

Ms Phillips, from Redditch, Worcestershire, had a day off work and decided to head out for a walk with Sally and her border collie, Maggie.

While they were out at Ipsley Meadows, the inquisitive dog decided to dive head first into a pool of mud until her entire fur coat was completely covered in muck.

Nicola, 42, said: “I had to burst out laughing and let her carry on, she was enjoying herself, but unfortunately no-one else was around to see it ‑ such a shame.

“I knew I had to take some pictures of this because she has never done it this bad before.

“Once she had finished we just carried on walking, but I was thinking there is no way she is going in the car like that.”

Fortunately there was a nearby stream for the dog to have a wash in before heading back to the car.

Nicola added: “I wanted to wear her out so we had a bit of peace at home. If you have a spaniel, you know what I mean.

“But to be honest I really don’t mind her doing this in puddles, I find it funny and I could not stop laughing. I sent the pictures to my partner and the response was, ‘What’s wrong with that dog?’

“Yes, she is nuts, but we wouldn’t change her ever.”

A golden retriever was left with only a tiny amount of fur on show after he wallowed in some mud.

Murphy was on a walk in Blackwood Forest, Hampshire, with his owner, Gill Smith, when she found him lying in a murky pit.

It’s a common trait of golden retrievers that they have a ‘muck radar’, but Gill, 50, from Overton, let Murphy have his moment of fun.

The 16-month-old pup’s favourite way to cool off on a warm day is to drench himself in mud, and this puddle saw three-quarters of his lovely coat turn brown.

Lotto results LIVE: What are the winning numbers for National Lottery April 17 draw?