Dr Shola in heated clash with Angela Levin over royals

The commentator said it was “historical fact” that the 96-year-old monarch was a “coloniser” which was “another former of slavery”. She posted to her 154,000 followers: “It’s historical FACT that the Queen is a Colonizer.

“You boast of British Empire & realm of colonies ALL in the name of its Monarch but deny she’s a COLONIZER?

“Colonization was another form of SLAVERY. FACT

“She DECOLONISED they cry!

“Which came first, the chicken or the egg?”

It comes just days after Australian senator Lidia Thorpe branded the Queen a “coloniser” as she took her oath of office.

The Indigenous parliamentarian from the Greens walked towards parliament’s upper house with her right fist raised above her head in a Black Power salute. 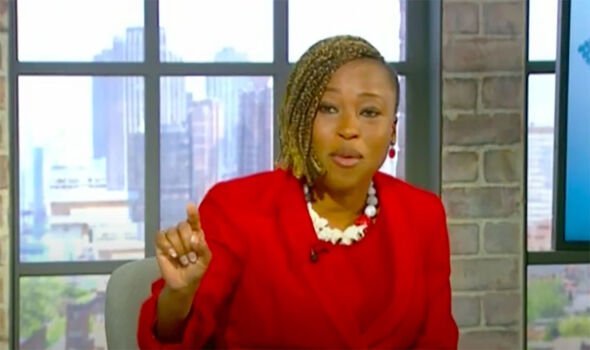 She then declared she would “bear true allegiance to the colonising Her Majesty Queen Elizabeth II”. Reacting to her statement, Senate President Sue Lines told Thorp that she was required to recite the affirmation as it is printed.

After a pause, Thorpe recited the affirmation correctly.

Dr Shola has long made her negative feelings towards the Royal Family clear.

Just recently, Dr Shola erupted in fury when the Queen was compared to Nelson Mandela.

Alan Titchmarsh paid tribute to the monarch during her Platinum Jubilee celebrations, saying: “She has enormous quiet charisma, like Nelson Mandela did.”

She wrote on Twitter: “Comparing the Queen to Nelson Mandela is not only obtuse but an outright insult.

“Mandela sacrificed his life & liberty for his people – oppressed by the White Supremacy British Monarchy upholds.

“The Queen could not walk in Mandela’s shadow.”