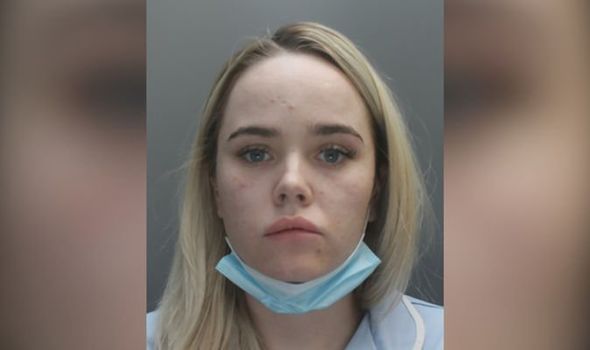 Lucy Ashton, 24, knocked Jennifer Dowd off her bicycle in a “rush” as she was late for work and left the woman for dead. A court heard Ashton, a care support worker, was “not focused on her driving” after being up until 2.30am arguing with her boyfriend.

Ms Dowd, a project manager for the NHS, was found unconscious and bleeding on the road. The 31-year-old newlywed was put in a coma but died nine days later on October 6 last year from “unsurvivable head injuries”.

Liverpool Crown Court heard the crash happened on a “bright, clear, dry, sunny Sunday morning” and she was wearing a helmet and bright pink clothing as she cycled on a country lane near her home, Liverpool Echo reports.

Ashton eventually returned to the scene near Sefton Village, Merseyside, after the crash and was arrested. She later admitted causing death by careless driving and failing to stop.

She was jailed for 12 months on Tuesday and banned from the roads for 18 months.

“A beautiful life has been cut short just as the future looked full of hope.

“I’m satisfied you were in a rush to get to work or at the very least your mind was not focused on your driving.

“You were in truth not keeping any or any proper lookout.

“If in any way you were affected by the low sun, it was your responsibility to drive slower, or even stop.

“The inescapable conclusion is had you been paying even moderate attention you would have seen her.”

But the judge acknowledged Ashton’s “genuine remorse” and said she had “much to offer the care sector” and helped vulnerable people.

“One of those references was from your mother. Rightly she cannot comprehend how the deceased’s family are feeling having lost their precious daughter,” the judge continued.

“You are understandably precious to your mum and she speaks of you and how it’s affected every day of your life.

“Others speak of you in glowing terms and also you being a shell of a person, having lost the zest of life and being broken.”

No one witnessed the crash but two residents saw Ms Dowd lying stricken in the road afterwards, and rushed to her aid.

Paramedics found the frame and back wheel of her specialized bike “completely buckled” and dashed the woman to A&E.

Robert Dudley, prosecuting, said Ashton drove for around four minutes, then phoned her boss and returned to the scene. She rang a colleague, whose flat she then went to in Bootle, Merseyside.

Mr Dudley said when she arrived she kept saying: “What am I going to do?”

He said: “She said the sun had been in her eyes and she thought she had hit a person.”

Ashton then rang police and when officers arrived, said: “I’m so sorry, I just panicked.”

When interviewed she said she had heard a “bang”, then looked in the mirror and saw a cyclist, but panicked and drove off.

Ashton said when she returned there were “loads of people” so she drove off “to get her head together”, which was wrong, but she was “so scared”.

Alex Di Francesco, defending, said there was no evidence Ashton, of Sefton Village, had driven at an “excessive speed”.

The defendant’s boss Helen Fagan said: “Lucy is very remorseful over what has happened and would never deliberately cause hurt to anybody. She is devastated as to the hurt that’s been caused.”

The court heard the offence fell “not far short of dangerous driving”.

Paying tribute to Ms Dowd, Judge Aubrey said: “She had recently married her wife Sam. She was a beloved daughter, granddaughter, sister, aunt, friend and colleague.

“She worked as a project manager for the NHS, about to be promoted, worked with vulnerable people, had a bright career ahead of her, and was a shining beacon, standing for equality, diversity and fairness.”

Samantha Brighton, who had just married Ms Dowd, said: “Jennie’s death is the least remarkable thing about her. I want to tell you about the impact of her love, joy, kindness and good nature on my life, before her death.

“Jennie and I met in South Africa in 2015. What are the chances of two people who lived 8,000 miles apart, finding each other and discovering they were the ones they’d always been searching for?

“We were engaged 11 months later – married three years after that. I moved my entire life from South Africa to nest with Jennie in Liverpool, a city I now proudly call home.

“In this time, Jennie held me, supported me, lifted me up and championed me in every way. She had an innate ability to make you see yourself through her beautiful green eyes.

“Jennie challenged me to be the best version of myself, while also accepting me and others just as we are. What a skill.”

Explainer: What are the Vatican's legal procedures for handling sex abuse cases?