The Home Secretary has faced longstanding criticism over her rhetoric when discussing refugees, such as referring to them as an ‘invasion’.

Braverman said last year said it was her ‘dream’ to see refugees offshored to Rwanda as part of her predecessor Priti Patel’s controversial plans.

But for Joan Salter, who won an MBE for her work on Holocaust education, the MP for Fareham’s words are akin to the language the Nazis used to justify killing her family and six million Jews.

Speaking at a briefing for local Tory members in Braverman’s constituency yesterday, the 83-year-old had asked Braverman: ‘I am a child survivor of the Holocaust.

‘In 1943, I was forced to flee my birthplace in Belgium and went across war-torn Europe and dangerous seas until I finally was able to come to the UK in 1947.

‘Now when I hear you saying words against refugees – like “swarms” and “invasions” – I am reminded of the language used to dehumanise and justify the murder of my family and millions of others.

‘Why do you find the need to use that kind of language?’ 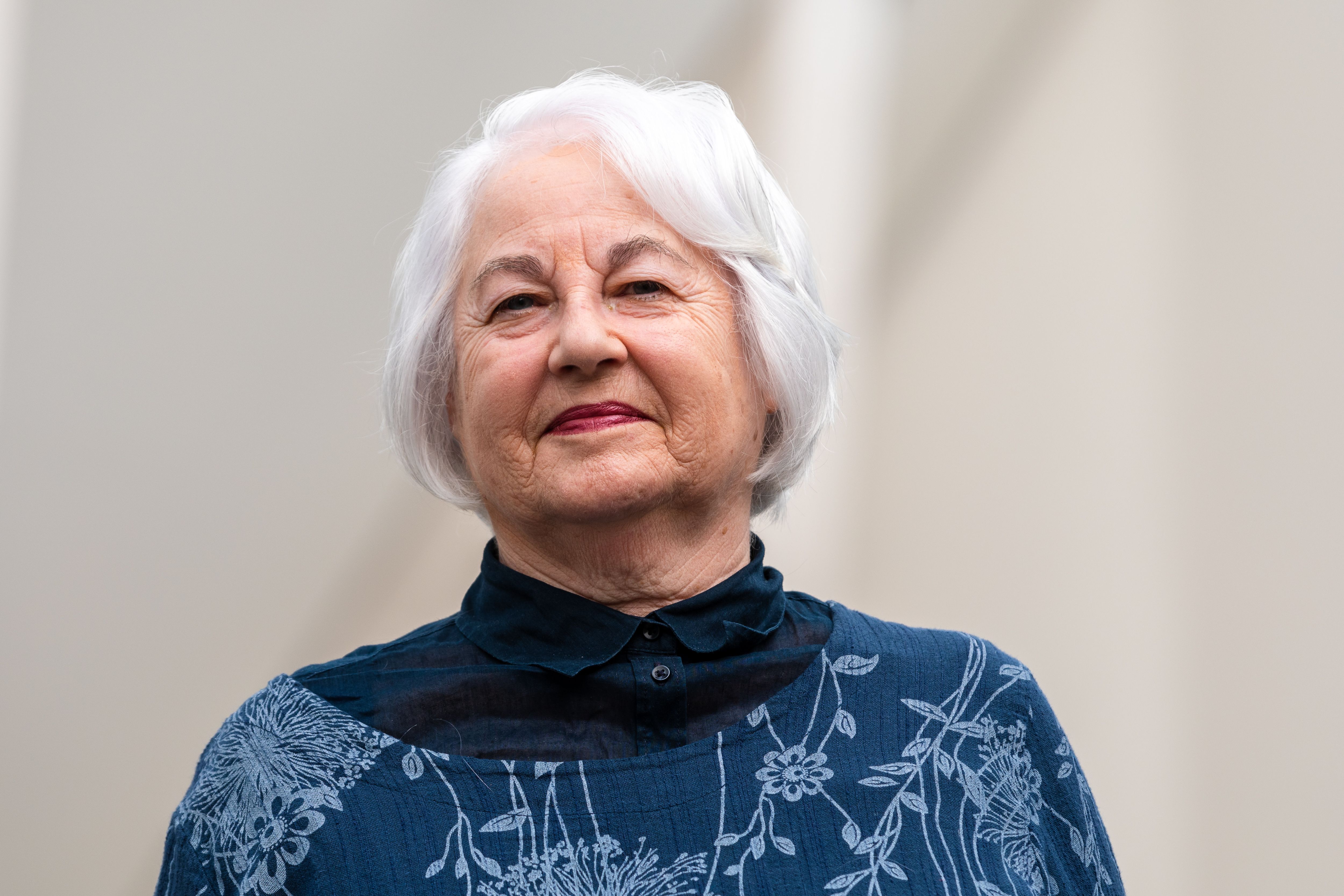 Inside the Holy Trinity Church, Braverman thanked Salter for her question and said: ‘I won’t apologise for the language that I’ve used to demonstrate the scale of the problem.

‘I’m not going to shy away from difficult truths nor am I going to conceal what is the reality that we are all watching. I see myself as your voice in government.’

Speaking today, Salter told Metro.co.uk: ‘This is something I feel so strongly about – the Holocaust didn’t start with the death camps, it started with language.

‘The impression she gave was that all the problems we have, from housing to the NHS to crime are all “imported” and by “exporting these people” everything’s going to be marvellous and the Conservatives are the golden key.

‘Having been on the receiving end of what happened in the Holocaust, I just feel very strongly that we have to speak up against the language and that I what I was asking her about.

‘It started off very subtly, like she has described (refugees) as “invaders”,’ Salter said, adding that she’s always ‘careful to draw parallels because that’s dangerous’.

‘It’s frightening because (refugees) are being criminalised,’ she added.

‘I don’t know what DNA we need to be absolutely British but we’ve got to get away from criminalising people who are desperate, who come from places like Afghanistan, who’ve been left behind and whose lives are in danger.’

Kolbassia Haoussou, director of survivor empowerment at Freedom from Torture which organised the question, said he wasn’t surprised by Braverman’s reply.

In fact, the torture survivor from central Africa said, he’s come to expect it.

‘The lack of empathy shown by the Home Secretary to people fleeing war and persecution is disturbing, but sadly unsurprising,’ he said.

‘For years, this government has scapegoated refugees to distract from their crisis-ridden leadership.

‘In our work supporting torture survivors, we see every day where the dehumanising language used by the Home Secretary can lead.

‘We urgently need a compassionate government that treats people seeking sanctuary in this country with dignity and humanity.’

Braverman, the daughter of Kenyan and Mauritian immigrants, reflected on her own parents’ journey to the UK as she replied to Salter.

‘They owe everything to this country and they have taught me a deep and profound love of Britain and British people,’ she said.

‘Their tolerance, their generosity, their decency, their fair play. That also means that we must not shy away from saying there is a problem.

‘There is a huge problem that we have right now when it comes to illegal migration, the scale of which we have not known before.’

Braverman stressed that the country ‘taking in people from Ukraine’ as well as Hong Kong and Afghanistan is ‘not a bad thing’.

‘Hundreds of thousands have found security, refuge and friendship in the UK,’ she said, ‘and long may that tradition continue – something that I have benefited from through my parents coming here.

‘Millions of people have benefited from it – something for which the UK is known around the world.

‘But I will not shy away from saying we have a problem with people exploiting our generosity, breaking our laws and undermining our system.

‘We must accept the enormity of the problem if we’ve got any chance of solving it.’

In response to an edited version of Braverman and Salter’s exchange tweeted by Freedom from Torture, a Home Office spokesperson said the clip ‘misrepresents the interaction’ and asked the charity to remove it.

‘The Home Secretary attended an event last night and took questions, including on immigration policy,’ they said.

‘Footage of a conversation with a holocaust survivor is circulating online. The video has been heavily edited and doesn’t reflect the full exchange,’ the spokesperson said of the clip viewed more than 1.3 million times.

‘The Home Secretary listened carefully to the testimony. She thanked her for sharing her story.

‘The Home Secretary also expressed her sympathy and set out why it is important to tackle illegal migration.’

Sonya Sceats, chief executive at Freedom from Torture, said: ‘It is not surprising that the Home Office is pressuring us to remove this video.

‘The Home Secretary’s response to Joan Salter betrays an unacceptable lack of understanding of the impact that her words have on people who have fled war, torture and persecution.’

Prime Minister Rishi Sunak has followed in both his predecessor’s footsteps by placing English Channel crossings front and centre of his government.

So much so that in his five-point plan to restore the country as the NHS and economy take a battering, Sunak promised to stop the perilous flow of boats crossing the choppy Channel.

He said: ‘It is not cruel or unkind to want to break the stranglehold of criminal gangs who trade in human misery and who exploit our system and laws. Enough is enough.’

Refugee rights groups have long agreed with Braverman – there is a ‘problem’ with Britain’s asylum system, they say, but not where the Tory party thinks it is.

But asylum applications in the UK are among the lowest in Europe – in 2021, there were just eight applications for every 10,000 Brits, per The Migration Observatory.

Though the number has increased, it’s still low by international standards: More than 120,000 migrants last year crossed the Mediterranean to continental Europe, the UN says, down from more than a million in 2015.

Campaigners also stress that the Channel is, for many migrants, their only way to get to British shores, given there are few official, safe routes to seek sanctuary.

The authorities have walled up most ways into the country for some asylum seekers, such as cargo trucks driving through the Channel Tunnel.

In 2021, at least 44 people, including three children, either died or went missing and are presumed dead, according to the UN migration agency’s Missing Migrants Project. Many are thought to have drowned in the frigid waters.

After a report found that the Manston migrant facility – built for 1,500 people who mainly crossed the Channel to conduct security checks – housed more than 4,000 people for weeks in appalling conditions, Braverman pointed to the ‘invasion on our southern coast’.

‘The British people deserve to know which party is serious about stopping the invasion on our southern coast, and which party is not,’ she told MPs last November.

Braverman has not on record described refugees as a ‘swarm’ – but some right-wing politicians have.

In June 2015, then prime minister David Cameron told journalists that ‘a swarm of people’ were ‘coming across the Mediterranean seeking a better life’.

That same month, UKIP leader Nigel Farage told ITV he had been ‘stuck on the motorway and surrounded by swarms of potential migrants’ who ‘tried the back door of the car to see whether they could get in’.

This all needs to change, Salter said.

‘The extreme language being used and the lack of humanity is frightening and we’ve got to get away from it.’

Princess Charlotte displays affection with parents at Games – ‘They’re mine. Lucky me’