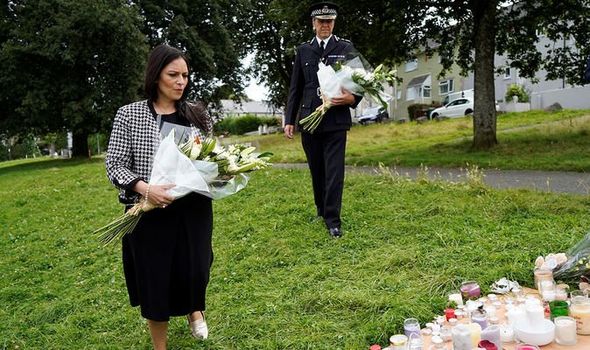 Ms Patel added the Devon city was “not alone” as it tried to come to terms with the first mass shooting in the UK for over a decade in which gunman Jake Davison killed his mother and then four strangers and injured two others.

She visited North Down Crescent Park yesterday, in the Keyham area of the city, close to the cul-de-sac where Davison first went on a rampage on Thursday evening.

He first shot his mother, Maxine Davison, 51, at their home in Biddick Drive before going into the street and targeting Sophie Martyn, three, as she pushed her toy pram with her adoptive dad Lee, 43.

In front of horrified witnesses Lee was shot in the back as he tried to protect Sophie. They were shot at least twice more at close range as they lay on the ground.

He also wounded Michelle Parsonage, 53, and her son Ben, 33, but both are expected to make a full recovery, relatives said yesterday.

As he walked out of the cul-de-sac, down a path behind houses, Davison told a stunned resident “Nothing to worry about mate,” before shooting Stephen Washington, 59, as he walked his two huskies.

CCTV footage then captured him casually walking across a street, with his pump action shotgun hanging by his side, towards his final victim, Kate Shepherd, 66, outside a hair salon on Henderson Place. She would later die in hospital.

Davison, 22, then turned the weapon on himself.

Last night relatives of the gunman apologised for the carnage he caused, saying they “grieved for every single person” he had killed.

The Davison family have connections to the Shetlands, where Maxine and fisherman father Mark are understood to have lived in the 1990s.

One told the Telegraph: “The family members up here in Shetland are traumatised, we struggle to string a sentence together as we are all devastated not just for our family.

“We are grieving for every single person that was affected by this – and we have to live with that for the rest of our days.”

Another source close to the family said Davison suffered with mental health problems for many years and recently came to blows with his father.

They said: “Apparently he hasn’t been well for quite a bit, mentally, and also beat up his father a couple of months ago.”

Back in Plymouth, Ms Patel was joined by chief constable of Devon and Cornwall Police Shaun Sawyer and Labour MP Luke Pollard as she laid a large bouquet of cream flowers, adding to the growing floral tribute to the victims.

Residents had held their own candle-lit vigil on Friday night in a local park.

Ms Patel said: “It’s tragic beyond words, really, really tragic, for a range of reasons, and obviously for those involved.

“I’m sure everyone will have known each other and this really will have touched so many people’s lives.

“But quite an important moment as well, where people are coming together from across the community to support one another.”

She added: “I can imagine how shattering this was for everybody, seeing the scale of what was going on, and the volume and response of the emergency services.

“But it is important to recognise that these things, thankfully, very, very rarely happen. This will not define Keyham.”

Kev Sproston, a member of the local neighbourhood watch team, told Ms Patel the mass shooting was “our September 11” and said: “Every single person in Keyham knows exactly where they were when this happened.

“The hurt is deep, and we need some help in order to look after the people in our community.”

Ms Patel responded: “People will have seen things that, quite frankly, in all our lifetime we would never, ever want anybody to witness or experience. It’s very hard. But you are not on your own, there is a great deal of support.”

Sophie and Lee had been taken nearby Derriford hospital, where Lee’s wife, Becky, works, but both died despite the medics’ best efforts.

Debbie Ackland, 55, a mental health support worker for the NHS who grew up in Keyham, was among those laying flowers or lighting candles.

She said: “I work for NHS social services, and as soon as I heard the names of the little girl and her dad, I knew who the mum was and that she worked for the NHS.

“I haven’t had any dealings with the family personally, but it’s just terrible.

“It’s devastating.” NHS administrator Hayley Locke, 37, added: “I don’t know any of the victims, but when I heard that the little girl’s mum also worked for the NHS, it really hit me hard.

“We’re obviously a massive staff, but we all care for each other, we look after each other in the NHS, and somebody in our Trust is going through hell now.

Around 70 floral tributes were left outside a Lidl supermarket close to the shootings with green heart-shaped balloons bearing the names of the five victims tied to a nearby railing.

Mourners have also left teddy bears and candles among the bouquets.

A minute’s silence was held before Plymouth Argyle’s first home match of the new season against Gillingham.

Flags at the club’s Home Park ground and across the city were also flown at half mast and books of condolence were made available.

A minute’s silence will be held at 11am tomorrow.

Nick Kelly, leader of Plymouth City Council, spoke of the shock the mass shooting caused for the area.

He told BBC Breakfast yesterday: “At the moment people are a little bit reluctant to come outside their doors, they are still in a state of shock.

“The ones that I did speak to really just want to recount what had happened, get things off their chest, and I guess just want a hug and reassurance things will get better.”

He added: “It’s OK not to be OK and help is available locally. You are not on your own.”

Melanie Fletcher, 52, said at first she and her husband thought the shots were a car backfiring but added: “After the third, fourth shot, my husband thought maybe it was fireworks, you know.

“But as we were cleaning our car, armed police came by and said go in and shut your door.”

Debbie Ackland told she had been in the park on Thursday evening. when the shootings happened.

She said: “I was just about to put my three grandchildren in the playground when all the helicopters came in. There were police walking around with dogs, it was so surreal. I’ve never seen anything like it in my life.”

Speaking about Davison being allowed to own a shotgun, Debbie added: “I deal with people with mental health problems every day, it’s one of the things we deal with in adult social care.

“It’s very sad, they need help. We do what we can, we refer them to the immediate crisis team ‑ it’s pretty much all we can do.

“I do know that if people have got a mental health background, they wouldn’t be issued that firearms licence anyway.”

She added: “You just don’t know who you’re living next to, what people are thinking, what they’re doing.”

Speaking about Davison having a firearms licence Hayley Locke added: “You don’t know the circumstances around it, but they must have thought it was okay to give him his licence back ‑ although whether he convinced them of that, I don’t know.

“But it sounds to me like he shouldn’t have had one. Having read about some of his social media posts, it sounds like he had a few problems.

“I don’t really want to talk too much about him. It’s the people who have lost their lives, and their families, that I feel most for.”

Putin says he will receive Covid-19 vaccine when he can, urges mass vaccination