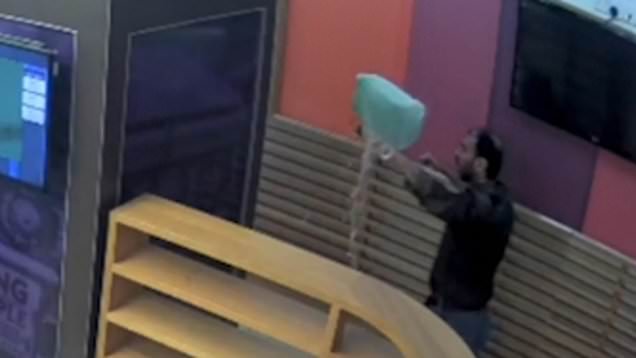 A homeless man who doused himself in petrol and threatened to burn down Kensington Town Hall and kill everyone inside has been jailed.

Ako Ahmed, 45, was filmed on CCTV strolling into the west London offices clutching a five-litre petrol can.

He began shouting at staff over a housing dispute before pouring petrol on the floor of the reception area.

He then covered himself in the flammable liquid and took out a lighter before threatening to kill an employee along with everyone in the building.

Police rushed to the scene and an officer bravely disarmed Ahmed of his lighter.

He was arrested on suspicion of arson and threats to kill and was later charged and remanded in custody.

During his trial, the court heard Ahmed had been involved in a dispute with the council about getting housing.

A jury convicted him of making threats to kill and threatening to damage property during the incident on September 4, 2019, but found him not guilty of attempting to commit arson with intent to endanger life.

Ahmed was sentenced to four years in prison nearly a year after his trial finished.

Detective Constable Nigel Pacquette said: ‘Ahmed had lost sight of the fact that he was attacking the very people who were trying to help him.

‘His actions could have resulted in serious injury to everyone present, including himself.

‘I’m thankful this wasn’t the case and applaud the officer who bravely disarmed Ahmed of his lighter.

‘Had it not been for the actions of responding officers who placed themselves in harm’s way, the outcome of this incident could have been far more sinister.’