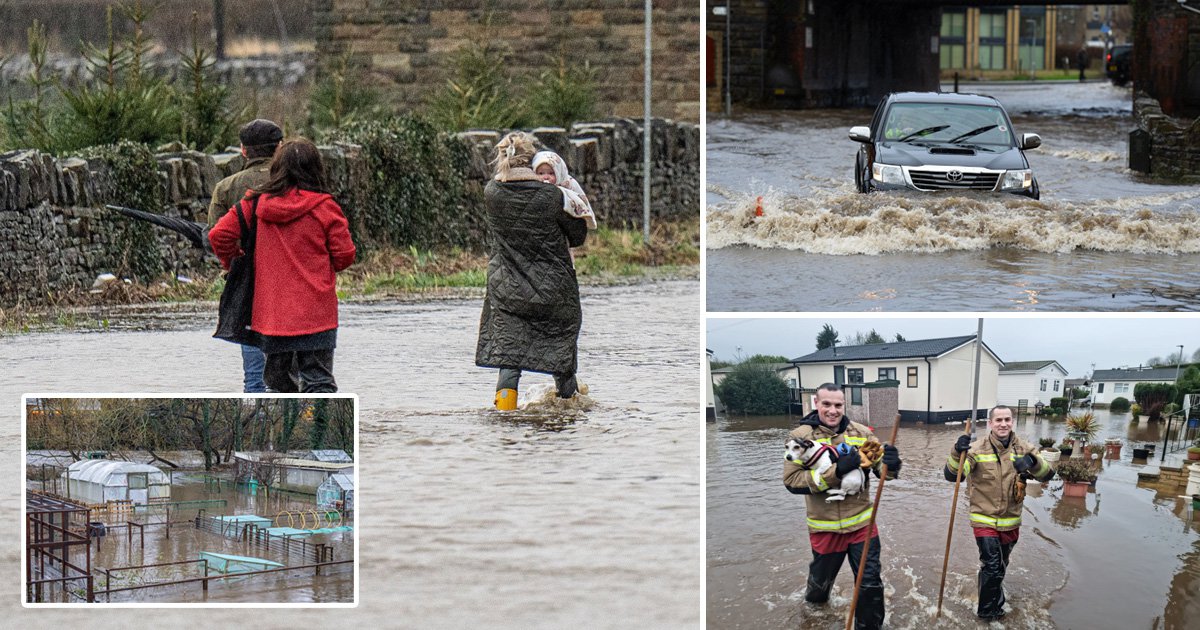 Homes have been evacuated and ‘danger to life’ flood alert warnings issued as Storm Franklin approaches.

There are more than 150 flood warnings in place across northern England and the Midlands from The Environment Agency.

This includes two severe flood warnings for Didsbury and Northenden in Manchester – meaning there is a potential of danger to life.

There is already severe flooding in parts of Northern Ireland, with the Met Office issuing a yellow warning for wind.

It comes after three people were left dead and 1.3 million properties without power as Storm Eunice wreaked havoc across the UK on Friday.

Firefighters came to the rescue in Yorkshire tonight as flood water hit homes in the town of Knaresborough.

Police have warned people in Doncaster to stay away from dangerous ‘fast flowing’ water in Sprotbrough after the River Don burst its banks amid stormy weather on Sunday night.

South Yorkshire Police said in a tweet: ‘We ask people to remain away from the area of Sprotbrough Falls and Sprotbrough Lock in Doncaster, after the River Don burst its banks in this location earlier this evening. Many of the footpaths in this area are presently underwater.

‘The water is fast-flowing and poses a risk to people attempting to wade through it.

‘Members of the public are being asked to remain away from the area at this time for their own safety. Thank you.’

Flooding has also swept in along the Rivers Calder and Aire in West Yorkshire and the Nidd and Wharfe in North Yorkshire.

Officials made a ‘pre-emptive’ decision to shut Rotherham Central today amid fears the track could be submerged.

A number of bridges over the River Aire have been shut after a large pontoon broke free from its moorings, police warned earlier.

However, the brunt of the new storm is predicted to hit over Sunday night and Monday morning.

A yellow warning for wind covers Wales, Northern Ireland, most of England and parts of south-west Scotland from 12am on Sunday until 1pm tomorrow.

The Met Office has warned Storm Franklin could bring damage to buildings and bring down trees.

Further power cuts may occur and air and ferry services may also be affected.

Storm Eunice left behind a clean-up cost in the excess of £360million, while tens of thousands of homes are still affected by power cuts.

It came hot on the heels of Storm Dudley, which also caused significant damage and outages in many parts of the country.

Almost 4,000 unvaccinated carers lost their jobs in the last week

‘We pay for it!’ Queen told to open doors to royal residences to host Ukrainian refugees