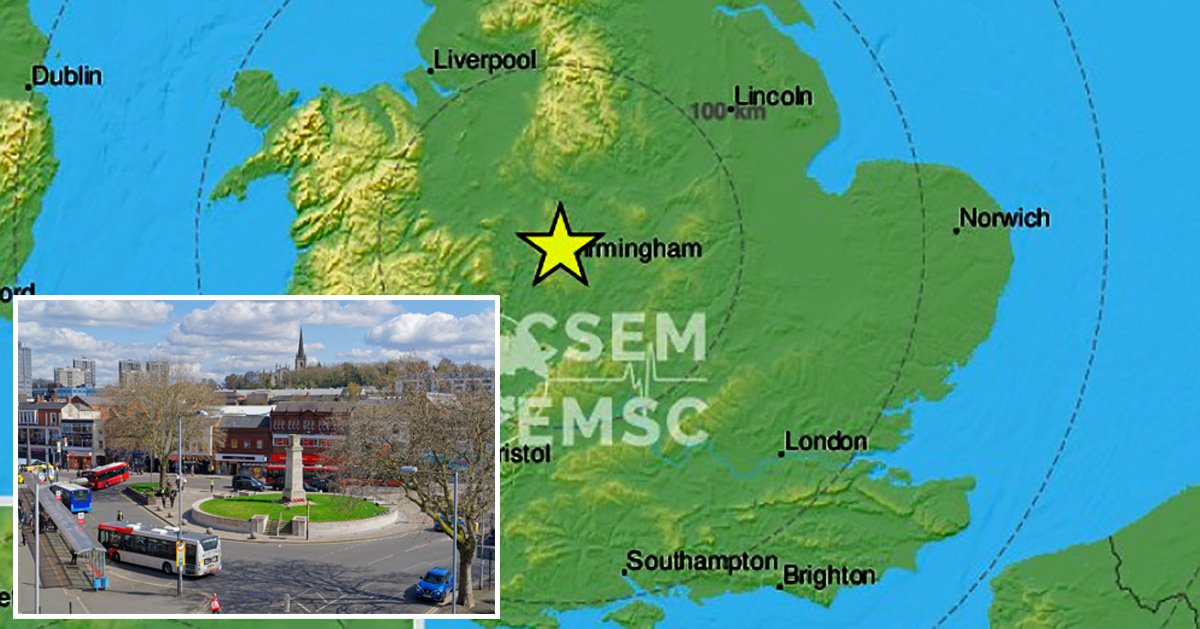 According to the BGS, the quake hit the town of Walsall, near Birmingham, at a depth of seven kilometres (4.35 miles) shortly before 11pm.

The service said the effects of the quake were felt in a 20km (12 mile) radius from its epicentre, with tremors being detected by residents in Birmingham, Wolverhampton and Dudley.

Affected residents told the BGS the quake shook their homes, with one person saying it ‘was like a wardrobe had fallen over or an explosion blast against the window’.

People were also jolted in their beds and felt vibration through the floors.

The BGS said the quake was approximately 13km (eight miles) east of the magnitude 4.7 Dudley earthquake, which was felt over most of England when it struck on September 22, 2002.

BBC journalist Elizabeth Joyce was at home in Willenhall, on the Walsall and Wolverhampton border, when it struck.

She said: ‘It happened around 11 o’clock and the whole house started to shake. Everything on the shelves was rattling, the walls vibrated and there was a loud rumbling sound.

‘It was a surreal experience. I was simultaneously thinking “oh my goodness, it’s an earthquake” and “there’s no way this is an earthquake, we’re in Wolverhampton”.’

Elizabeth said the quake only lasted ‘a few seconds’ and didn’t cause any damage ‘but it very weird’.

There were also effects felt 20km away in Coventry, Lichfield and Sutton Coldfield.

Within an hour of it shaking the ground, West Midlands Police said it received 5,000 calls to its switchboard and 600 calls to 999.

One person tweeted: ‘I thought I was loosing my mind when the whole house shook while I was watching the TV. Apparently it was an earthquake.’

Earthquakes are rare in the UK  because it is so far from the edge of any of the tectonic plates which make up the Earth’s crust, where most quakes occur.

When earthquakes do happen, they are relatively weak by global standards.

The biggest earthquake ever experienced in the UK occurred in 1931, near the Dogger Bank, 60 miles off the Yorkshire coast in the North Sea.

Recorded at 6.1 on the Richter scale, the effects were felt throughout Britain as well as in Belgium, France, Germany, Denmark and Norway.

Royal titles in order: Which royal has the most prestigious title?