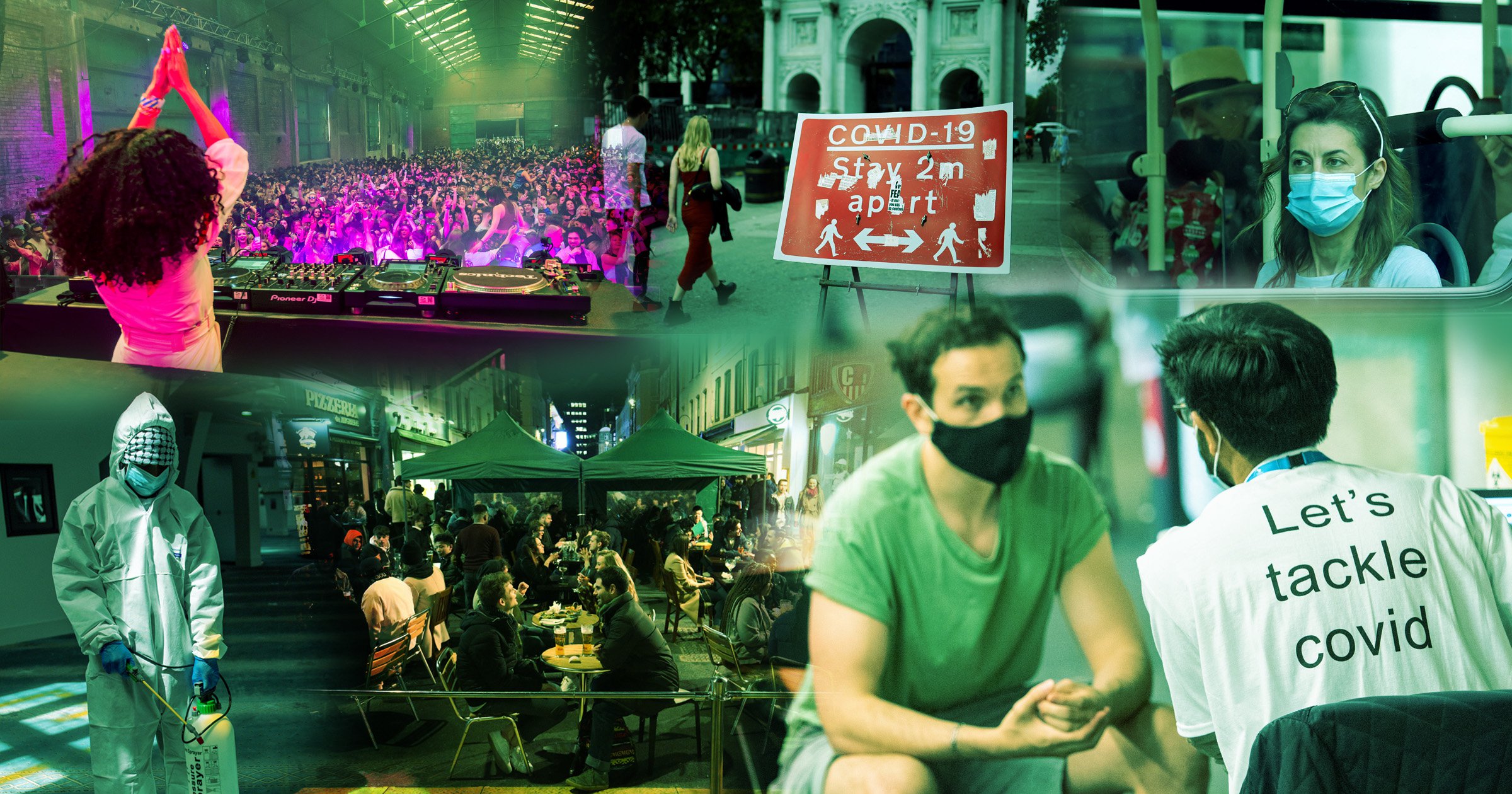 Millions pinned their hopes on June 21 as a Government roadmap released in February anticipated all social contact rules being scrapped.

Dreams of a return to normality came crashing down today as the prime minister warned more time is needed to tackle rising infection rates, driven by the Delta Covid variant, first identified in India.

One restriction will still be eased across the country on June 21, with the 30-person limit on weddings lifted.

But social distancing rules and compulsory mask-wearing will stay until July 19 as scientists warn of the possibility of a ‘substantial’ third wave.

Nightclubs will remain closed, limits on numbers for sporting events will stay in place and the rule of six must still be followed indoors.

Mr Johnson has warned the nation coronavirus cases are growing by about 64% per week and doubling every week in the worst-hit areas.

The average number of people being admitted to hospital in England has increased by 50% week-on-week and by 61% in the north-west.

However, the Tory politician is ‘confident’ the delay will not go beyond four weeks, amid concerns restrictions could stay until at least August.

He has ‘reserved the possibility’ of progressing to Step 4 of his roadmap earlier than July 19 if the data looks positive.

He said: ‘It’s unmistakably clear that vaccines are working and the sheer scale of the vaccine rollout has made our position incomparably better than in previous waves.

‘But now is the time to ease off the accelerator because by being cautious now, we have the chance in the next four weeks to save many thousands of lives by vaccinating millions more people.

‘And once the adults of this company have been overwhelmingly vaccinated, which is what we can achieve in a short space of time, we will be in a far stronger position to keep hospitalisations down, to live with this disease and to complete our cautious but irreversible roadmap to freedom.’

The target of offering first jabs to all adults by the end of July has been brought forward to July 19, with those over the age of 23 in England able to book from tomorrow.

By July 19, the Government hopes to have double-jabbed around two-thirds of the adult population – including everyone over 50, all vulnerable people, all frontline health and care workers and everyone over 40 who received their first does by mid-May.

The Delta strain is now the dominant form of Covid in the UK, accounting for 90% of cases.

It is feared to be 40% to 60% more transmissible than the Alpha variant first detected in Kent, and appears to double the risk of hospitalisation.

The Pfizer-BioNTech jab was found to provide 79% protection against the Delta variant, compared with 92% against the Alpha strain, at least two weeks after the second dose.

Meanwhile, the Oxford-AstraZeneca jab offered 60% protection against the Delta variant – compared with 73% for the Alpha variant.

The Government’s decision is likely to spark outrage among the hospitality community which has been battered over the last year.

Kate Nicholls, the chief executive of UK Hospitality, has said the news is ‘devastating’, adding that it is going to be ‘incredibly challenging’ for many businesses to survive.

Huge crowds of maskless anti-lockdown protesters were pictured marching to Downing Street today to demand all restrictions be lifted immediately.

Laurence Fox and Piers Corbyn were among the demonstrators, who chanted ‘shame on you’ at the gates of Number 10.

The PM’s long-awaited announcement came in a 6pm press conference on Monday evening – but the Government has been accused of ‘riding roughshod’ over Parliament by not sharing plans with the House of Commons beforehand.

Speaker of the House Sir Lindsay Hoyle said he is forcing Health Secretary Matt Hancock to come to the chamber and answer questions at 8.30pm after being told the gathering could wait until Tuesday.

He said: ‘This House needs to know, it needs to know first. I find it totally unacceptable that once again, once again, that we see Downing Street running roughshod over members of Parliament.

‘We’re not accepting it and I’m at the stage where I’m beginning to look for other avenues if they’re not going to treat this house seriously.

‘But I will say I think it’s time for me to have a meeting with the Prime Minister to actually put on the record here now but with him that this House matters.’

'David Schwimmer lookalike' to appear in court on theft charge