RNLI rescues little girl on inflatable after drifting out to sea

A child was left stranded on a dinghy for more than three minutes when a safety line detached and high tides carried her far out to sea. The incident happened off the coast of Rhyl, North Wales, on Bank Holiday Monday.

In a dramatic rescue, RNLI lifeguards who were already at sea dealing with a separate incident, were able to reach the little girl who had managed to stay on board the inflatable.

Video footage shows the frantic RNLI team rushing to reach the girl and shouting: “It’s ok! Are you alright?”

The terrified child screams and says: “I am really scared, please help!” 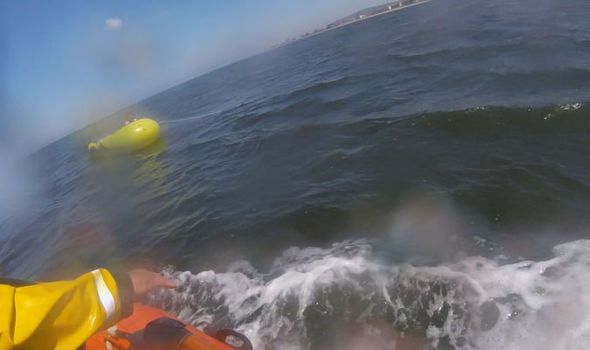 The heroic lifeguards managed to reach the vessel and lifted the child into the lifeboat. They wrapped her in a blanket and reassured her that they would get her back to her family who were waiting on the beach.

Paul Frost, Rhyl Lifeboat Station press officer, said: “It was very lucky that the crew was in the area, attending another call, they were very quickly on the scene.

“She had drifted about a mile off shore. But, she did the right thing by staying in the dinghy, and not trying to swim to shore.

“She was crying when the crew found her, and they took her back to shore to her family. No medical help was needed – she was just a little bit shaken. 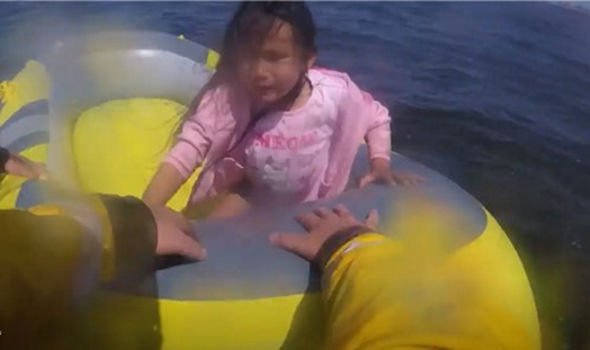 “Her family explained that the dinghy was attached to a line, but they let it go and within seconds it had drifted away.”

The incident was one of many the RNLI had to deal with over the bank holiday weekend, with five callouts received across North Wales on Sunday (May 30) alone.

The RNLI have launched a beach safety campaign and are warning holidaymakers flocking to the nation’s beaches to be aware of the dangers.

RNLI’s Head of Water Safety, Gareth Morrison, said: “We are expecting this summer to be the busiest ever for our lifeguards and volunteer lifeboat crews.

“We want people to enjoy the coast but urge everyone to respect the water, think about their own safety and know what to do in an emergency.

“Our main advice is to visit a lifeguarded beach and swim between the red and yellow flags. RNLI lifeguards will be patrolling around 245 beaches this summer to offer advice on how to stay safe and they are also there to help anyone who gets into trouble.

“Coastal areas provide a great opportunity to enjoy fresh air and open space, but they can be an unpredictable and dangerous environment. Particularly during early summer when air temperatures start warming up but water temperatures remain dangerously cold, increasing the risk of cold water shock.”