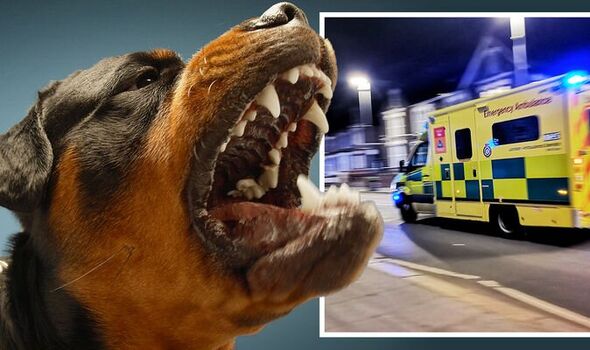 All five attended Countess of Chester Hospital, in Cheshire, for treatment. Following the attack, police seized the animal and transported it to a secure kennel. It occurred on August 30 at Luton Park in the town of Ellesmere Port.

A spokesman for Cheshire Police said: “At 2.40pm on Tuesday, August 30, police were called to reports of a dangerous dog at Luton Park, Ellesmere Port.

“Officers attended the scene and found a Rottweiler, which was off the lead and out of control.

“During the incident five people were bitten as they attempted to control the dog.

“They all sustained minor injuries and attended the Countess of Chester Hospital for treatment to their injuries.

“The dog was subsequently seized by officers and is currently in a secure kennels.”

An investigation into the incident is ongoing.

The UK has seen a sharp rise in dog bites over the last 15 years with double the amount of hospitalisations due to an attack.

The RSPCA had previously raised concerns about people during the pandemic impulse buying dogs without knowing the conditions they had previously been kept in.

The NHS advises anyone bitten by a dog to clean the wound with soap and water and then gently squeeze the wound to help prevent infection before covering it with a clean dressing.