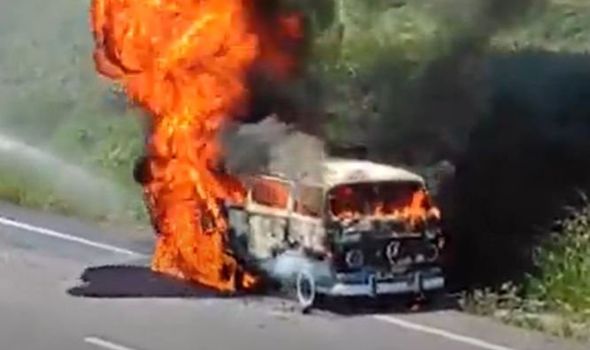 Firefighters rushed to the A361 near Tiverton, Devon, at around 2pm on Monday. They were able to bring the fire to control but say 90 per cent of the vehicle was damaged.

The cause of the blaze was deemed accidental, Devon Live reports.

It is unclear if anyone was injured and, if so, to what extent.

One lane was closed eastbound and motorists faced several miles of delays back towards South Molton. Diversions were in place for holidaymakers to reach the M5 just east of Tiverton.

Devon and Somerset Fire and Rescue said two crews were sent to the blaze and used hose reel jets to get it under control.

But the flames did cause a fire moorland fire on land adjacent to the carriageway. Footage captures smoke billow from the green space.

A statement from the brigade reads: “Several calls were received by Fire Control to reports of a fire on the A361 near Tiverton.

“Two fire engines from Tiverton and 1 from Cullompton were sent to the location.

“On arrival, crews confirmed this to be a camper van, well alight.

“Crews got to work with two breathing apparatus wearers and two hose reel jets to get the fire under control.

“This was a fire involving a camper van, which was fully involved in fire on the main A361. One LPG cylinder was removed and deemed safe. The fire was extinguished using two BA wearers, two hose reel jets and one dry powder extinguisher.

“The vehicle was 90 per cent damaged by fire and the cause was accidental.”