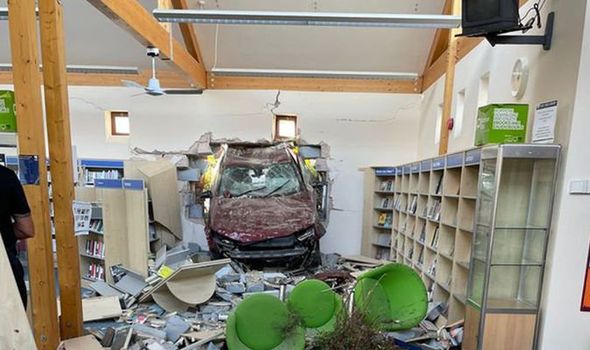 The pair crashed into the New Forest library on Sunday morning. The crash sent brickwork, shelves and library books across the floor.

Both occupants of the vehicle were able to release themselves from the wreckage.

But, as the car was wedged in the building wall, they found themselves locked in the library.

Hampshire and Isle of Wight Fire and Rescue Service (HIWFRS) confirmed that a crew were sent to Hythe Library shortly after 11.15am on Sunday.

“Hardley firefighters were called at 11.14 this morning (17 October) to the incident at the library on Pylewell Road,” a spokesperson for the fire service said.

“Crews after using the tirfor [hoist] to stabilise the car, tunnelled through to give [Immediate Emergency Care] to the casualties then forced entry to get them out.”

They continued: “The firefighters handed the casualties over to South Central Ambulance Service paramedics, before making the scene safe by stabilising the vehicle.”

Hampshire Constabulary told DevonLive that no arrests had been made.

It is now temporarily closed “for at least a week” while repairs are made to the building, Hampshire County Council said.