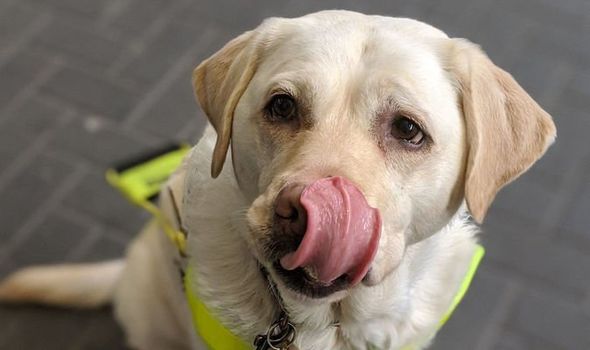 “There’s no training for what to do if that happens,” explains Amit, 40, a former A&E doctor who suddenly went blind in his mid-30s.

“I just assumed she didn’t want me to go anywhere because it was really busy and she was finding her bearings.”

As Amit patiently waited for Kika to move on, he discovered why she had stopped. And it shocked him.

“She said somebody had whacked Kika with an umbrella across her face. When I came home I was so upset – how could somebody do that to a guide dog?”

What’s more, Amit realised it wasn’t the first time Kika had been attacked by a member of the public.

“Kika is usually in her element in busy stations, but that was the fifth or sixth time she’d stopped and sat down on my feet,” he explains.

“A couple of times she’d backed me up against a wall, and again I thought it was because it was crowded. But now I recognised the reaction and I realised it was because she’d been attacked.”

It was a rude ­awakening to just how difficult life with a guide dog can be. 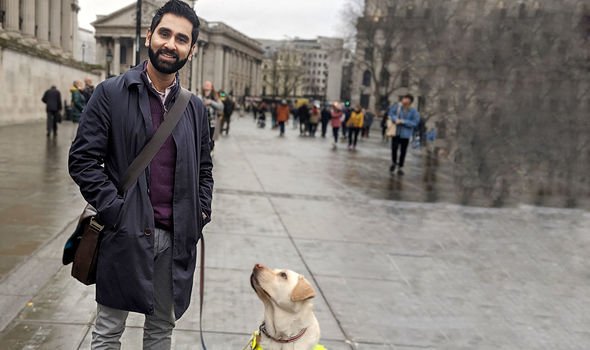 Amit, now a diversity and inclusion consultant who lives in Greenwich, south-east London, with his wife Seema and their young son and daughter, lost his sight aged 33, ending his flourishing medical career.

He was born with a condition called keratoconus, meaning his corneas were misshapen, but wasn’t diagnosed until his early 20s.

Although the condition doesn’t normally lead to blindness, a corneal transplant in his mid-30s was rejected, causing the nerve endings at the back of his eyes to pinch and rupture.

Terrifyingly, over the course of 36 hours, Amit went totally blind.

“When I woke up in the morning, it was like looking through a dirty glass and my sight faded away.”

“Everything I knew changed overnight. Even walking up and down stairs was scary.”

Unable to continue working as a doctor, he cut himself off from the world for months.

“I didn’t want to say anything or eat anything. I didn’t know who I was anymore.” 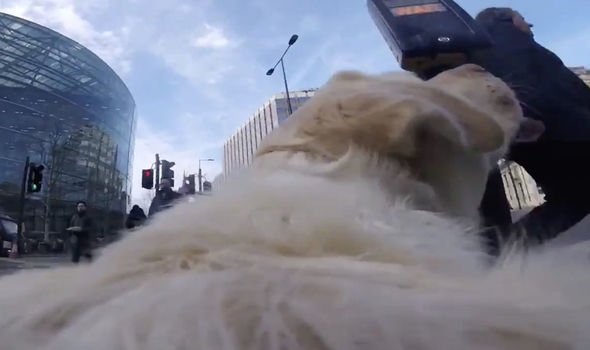 Gradually, with the help of his wife and family, Amit regained his confidence.

Two years after he lost his sight, he applied to be matched with a guide dog. And just six weeks later, Amit got a call saying there was a potential match for him.

When Amit met Kika, they hit it off immediately. And the rest, as they say, is history.

With a guide dog instead of a white cane, Amit found new confidence navigating central London and using public transport.

“Kika loves peak time in London. Take her to King’s Cross at 7am and she’s the happiest,” he chuckles.

“Being matched with Kika brought out the old Amit in me, who was ­confident. She gave me a zest for life again.”

It was about six months after Amit was matched with Kika that he ­discovered she had been hit with an umbrella on the Tube.

“I was so upset. I couldn’t believe what she goes through every day and still manages to get me home each night,” he says. 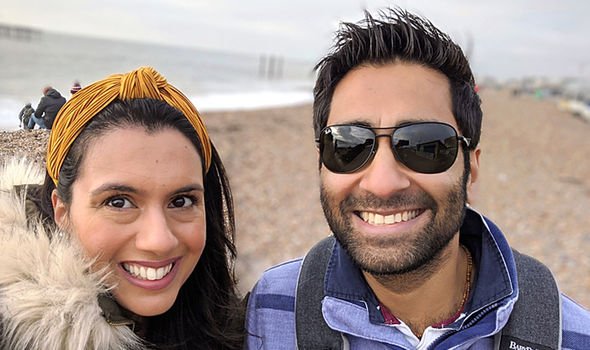 That evening when he was chatting to his wife, Amit had an idea.

“I said to my wife, ‘Wouldn’t it be interesting if we could have a Kika’s eye view, to see what she sees?’”

Amit and Seema decided to attach a camera to Kika’s harness so Seema could watch the footage back in the evening.

After the first day of filming, Amit was horrified at how badly some commuters treated poor Kika.

“The first day we put a camera on her we caught two people hitting her,” he says.

“We could see people trying to move her out of the way or barging into her, or fighting to get on the escalator before her. And this was just on the first day.”

“Someone tries to barge Kika out of the way about once a day,” he says. “Sadly, the abuse happens three or four times a week. The funny thing is, a lot of people are nice on an ­everyday basis, but when you put them on a busy commute in London, it’s like flicking a switch and they’re angry.” 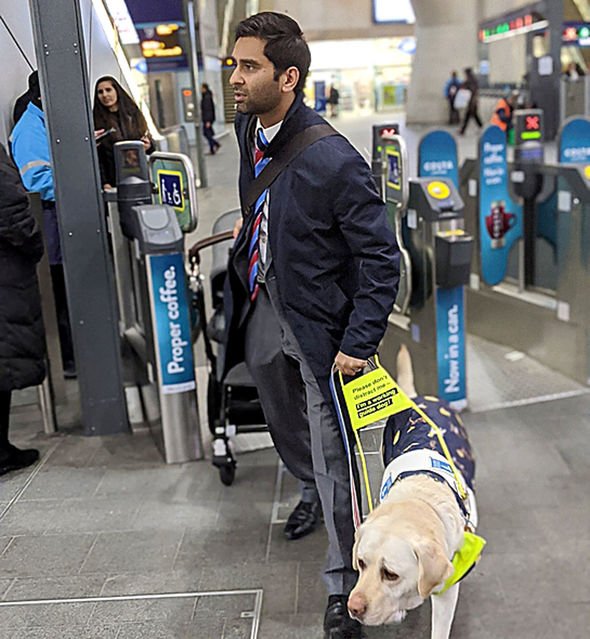 Now Amit shares the footage on social media to raise awareness of the issue. Kika’s own Twitter account – @Kika_GuideDog – has more than 20,000 followers, with Amit’s account, @BlindDad_UK, also hugely popular with 13,000 fans.

But some incidents are so ­unsettling he doesn’t show the ­footage to anyone but his wife.

“Some of the incidents we’ve got are so bad, we don’t even want to share them,” he admits.

“As a visually impaired person, you feel very vulnerable when you’re out and about. A bad encounter can stop you from ­wanting to leave the house. It stays in the back of your mind. It’s a ­massive knock to your confidence and your independence.”

One of the biggest misunderstandings is about escalators. Some guide dogs are specially trained to use them, but people still try to barge Kika, now aged six, out of the way. Or they become impatient because they can’t walk past her.

“I’ve even had people shouting at me, telling me guide dogs shouldn’t be on public transport at peak time, or that they shouldn’t be on escalators,” says Amit. “Only five per cent of guide dogs are ­escalator-trained and fortunately Kika is one of them – otherwise we’d have to go to step-free stations or ask staff to turn ­escalators off, which doesn’t really work when you’re travelling at peak times in London.

“People chase me through the station to tell me I should ­apologise to people behind me on the escalator for holding them up. Or they tell me disabled people shouldn’t be travelling at peak times.” The Royal National Institute of Blind People confirms that, sadly, ignorance of the issues blind people face is all too common. 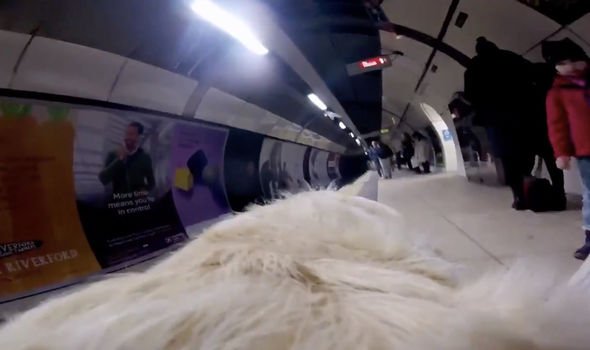 “At RNIB, blind and partially sighted people tell us poor understanding amongst the general ­public of the reality of living with sight loss is the biggest barrier to them leading the life they want to lead,” says Sarah Lambert, the charity’s head of social change. “While we know that the public don’t ­necessarily have bad ­intentions when it comes blind and partially sighted people.

“All too often we do hear stories of people’s poor experience, whether that’s purely because of a lack of understanding or in some cases prejudice.

“From people with a visual impairment being grabbed and ‘helped’ unnecessarily across a road they didn’t want to cross to individuals being refused entry to a restaurant with their guide dog, these interactions have a profound impact on the confidence of a blind or partially sighted person.”

For those who do ­experience prejudice, ­support is available from Guide Dogs. “If a guide dog owner experiences a problem, we will support them in every way we can and do everything necessary to ensure the dog’s welfare,” says a spokesperson.

“Most people are well-intentioned, but these ­incidents are humiliating,” he says. “Without Kika, I don’t know what I’d do.”

* Kika & Me: How One Extraordinary Guide Dog Changed My World by Amit Patel (Macmillan, £16.99) is out today. For free UK delivery, call Express Bookshop on 01872 562310 or order online via expressbookshop.co.uk