Laura Kuenssberg shed light on the reaction former Foreign Secretary Boris Johnson sparked in the Prime Minister with his pro-Brexit speech at the Conservative Party Conference in the Autumn of 2018. The BBC Political Editor suggested Mr Johsnon has rendered Theresa May “totally incandescent” after he claimed Mrs May’s withdrawal agreement would abandon the UK to European rule “forever.” Reviewing nearly six months of Brexit process in her programme The Brexit Storm, the BBC editor shared her immediate response to Mrs May admitting she had been “quite cross” with Mr Johnson: “Theresa May is a very controlled person.

“For her to admit ‘yeah, that makes me quite cross’ is probably what you or me would say ‘I’m totally, utterly, completely incandescent. I can’t even talk to you right now I’m so angry’.”

The comment followed what social media users branded as “awkward” moments between the BBC Political Editor and the Prime Minister ahead of their interview at the Tory Party Conference in September 2018.

A member of the public commented: “F*****g hell Theresa May is even more awkward than I ever thought she could be.” 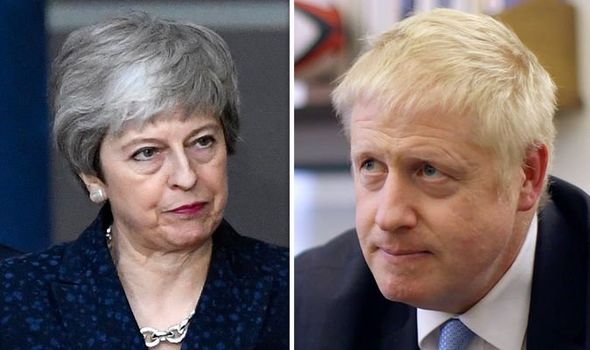 However, Ms Kuenssberg also revealed the Prime Minister prefers to go discuss the “things that matter” rather than do small talk or gossip before interviews.

The BBC journalist added: “Theresa May takes the responsibility she has massively seriously and she carries it heavily.

“She doesn’t do small talk, she doesn’t want to gossip, she wants to talk about things that matter.”

During the programme Chief Whip Julian Smith suggested the results of the 2017 general elections played a role in the division currently gripping Parliament and the country.

Mr King said: “My job is to help the prime minister in delivering this withdrawal agreement.

“The Government as a whole, probably, should just have been clearer the consequences of that would be Parliamentary arithmetic would mean that this would be, inevitably, a softer type of Brexit.”

During the programme, former chief of staff Nick Timothy told the BBC she always saw Brexit as a “damage limitation exercise”.

Speaking about Mrs May, Mr Timothy said: “As somebody who’s been very close to her and respects and likes her, to be honest, I feel quite sad about where we are right now. But the big problem is that ministers and I would include Theresa in this, struggle to see any economic upside to Brexit.

“They see it as a damage limitation exercise.”

He added: “If you see it in that way then inevitably you’re not going to be prepared to take the steps that would enable you to fully realise the economic opportunities of leaving.”

While Parliament voted down Mrs May’s withdrawal agreement three times, MPs on Monday once again failed to deliver on a majority in support for a Brexit option in the second round of indicative votes.