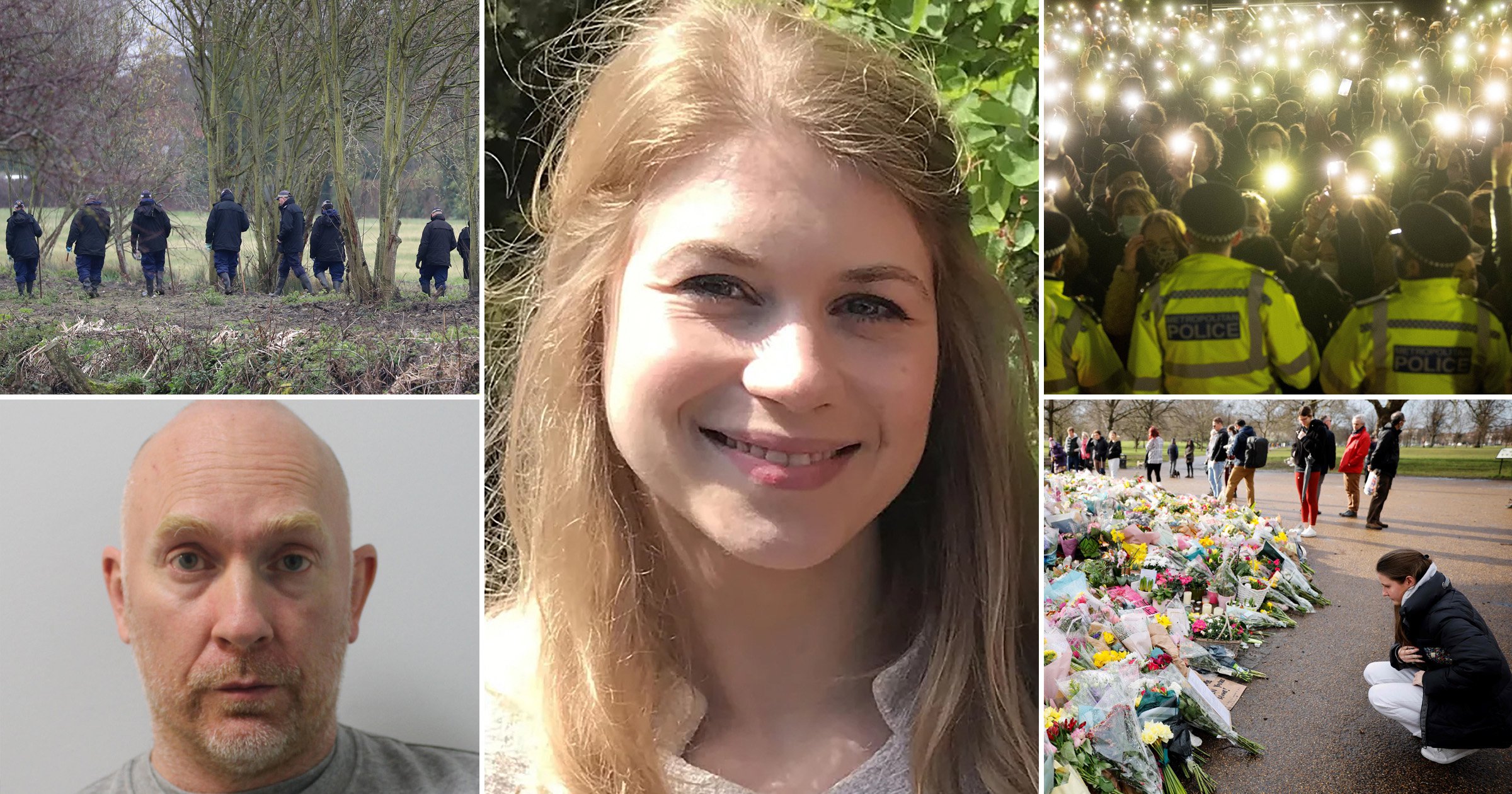 Sarah Everard had her ‘whole life ahead of her’, but her future was ripped away as she walked home six months ago.

The ‘beautiful’ marketing account manager, 33, has been described as a ‘shining example to us all’ by her loved ones.

Her death sparked a national discussion about violence towards women, with thousands sharing their daily reality of feeling unsafe on the streets.

Six months on, 80 women have been murdered where a man is the principal suspect.

Meanwhile, half of women feel unsafe while walking alone in busy places at night.

Today, former Metropolitan Police officer Wayne Couzens, 48, was told he will die behind bars after being sentenced at the Old Bailey.

As Sarah’s killer finally sees justice, we have taken a look back at how the tragic case unfolded.

Timeline of the Sarah Everard case

Sarah is ‘in good spirits’ as she leaves a friend’s house in Clapham, south London, to walk to Brixton around 9pm.

She speaks to her boyfriend, Josh Lowth, on the phone for about 15 minutes before continuing her walk, but never makes it home.

A court is later told how PC Wayne Couzens pulled up in a Vauxhall Astra he hired hours earlier and pretended to arrest her around 9.30pm.

She was handcuffed at about 9.34pm, detained in the car by 9.37pm and they were on their way to Kent a minute later, prosecutor Tom Little QC said.

Couzens transferred Sarah to his own car in Dover around 11.30pm, before driving her to a remote rural area where he raped her.

There is no sure way of knowing where or when she was killed but investigators believe she was strangled to death by the time the dad-of-two stopped at a service station to buy soft drinks around 2.30am the next morning.

The alarm is raised as Sarah never texts her friend to say she got home and fails to attend a scheduled client meeting.

Couzens’ phone data indicates he was moving around the Ashford area in the early hours of March 4 and at 4.28am his car was seen driving towards Hoads Wood, where Sarah’s body is found several days later.

The dad-of-two visits a Costa coffee shop to buy breakfast shortly before 8.15am before returning the hire car to Enterprise.

After travelling to Sandwich to throw Sarah’s phone in a stream, he calls a dentist shortly after 11.30am to arrange appointments for his two children and appears ‘calm’.

He then buys petrol which he later used to burn Sarah’s body, the Old Bailey hears.

Couzens buys two builders’ bags from a B&Q store in Dover before driving to Hoad’s Wood.

The sick PC burns Sarah’s body in a refrigerator in an area of woodland he owns, the court is told.

A witness claims to have seen a ‘large orange and yellow flame’ at around 12.45pm.

Sarah’s remains are believed to have been transported in the B&Q bags before being dumped in a nearby pond.

Later that day, Couzens calls a vet to make an appointment for the family dog about ‘possible medication for separation anxiety’.

The Metropolitan Police say they are ‘increasingly concerned’ over Sarah’s disappearance.

Her family says it is ‘totally out of character for her to disappear like this’ as search parties are sent out and missing posters appear across the capital.

Couzens buys a number of items off Amazon, including a blue tarpaulin sheet and bungee cargo net, to be delivered the following day, the Old Bailey hears six months later.

Private door camera footage is released of the young woman walking alone along the A205 Poynders Road towards Tulse Hill, just south of Brixton.

The investigation is handed to Scotland Yard’s Specialist Crime Command due to the ‘complex nature of the probe’.

A court later hears how Couzens took his wife and kids on a day out to the woods where he burned Sarah’s body two days earlier.

He was on five days’ leave from work and had ’emailed his supervisor to say he felt unable to carry firearms’.

Officers say they remain ‘open-minded as to all possibilities’ while confirming the search remains a missing person investigation.

More than 120 calls from the public have been made and more than 750 homes visited.

Serving police officer Couzens is arrested at a house in Kent in connection with themarketing account manager’s disappearance.

The former cop tries to wipe data from his mobile phone around 40 minutes before he is arrested – but is still linked through cell site data and the white Vauxhall Astra he rented.

When shown a photo of Sarah, he denied knowing who she was, claiming he only knew of her disappearance from the news, prosecutors later say.

He is also said to have created an elaborate cover story, saying he was being blackmailed into abducting Sarah by Eastern European gangers he owed money.

News of his arrest sends shockwaves around the force, with Assistant Commissioner Nick Ephgrave saying the fact the man is a cop is ‘deeply disturbing’.

A woman is arrested at the same address on suspicion of assisting an offender.

Police confirm a man in his 40s has been arrested on suspicion of murder, kidnap and a separate allegation of indecent exposure.

Dad-of-two Couzens is unmasked as the suspect by the media.

Human remains are discovered that evening in woods in Ashford, Kent but they are yet to be formally identified.

Couzens is taken to hospital after being found collapsed in his prison cell with head injuries.

The Old Bailey later hears how he deliberately hit his head on a toilet bowl shortly before his interview with police.

He was placed under supervision when he returned.

Human remains found in Ashford are confirmed to be that of Sarah.

Couzens is charged with murder and kidnap.

Shortly after the charges are confirmed, police say the cop has been back in hospital with a fresh head injury.

Couzens makes his first appearance at Westminster Magistrates Court but does not indicate a plea.

Hundreds of mourners pay respects to her at a memorial in Clapham – including The Duchess of Cambridge who says she ‘remembers what it’s like to walk in London alone’.

People across the UK are asked to light candles in honour of Sarah’s memory after vigils are cancelled following failed discussions with police amid the pandemic.

But hundreds gather regardless to ‘remember Sarah and all victims of gender-based violence’.

One event in Clapham Common sees protesters clash with officers who are slammed as upsetting scenes of women being manhandled and arrested come to light.

Metropolitan Police Commissioner Cressida Dick refuses to resign as the Met comes under pressure for the ‘unacceptable’ handling of the vigil.

Hundreds gather outside Scotland Yard and march to Parliament chanting ‘shame on you’.

The police response is described as ‘hands-off’ and ‘markedly different’ to the previous day.

Boris Johnson chairs a meeting of the crime and justice taskforce to discuss ways to keep women safe on the UK’s streets.

He says he is ‘deeply concerned’ by footage of the protest in Clapham and vows to ‘unite us in determination’ to drive out violence against women and girls.

Couzens appears at the Old Bailey by video link, wearing a light red jumper and grey joggers with a wound on his forehead.

He speaks only to confirm his name and date of birth.

An inquest into Sarah’s death opens as her body is released to her family so they can give her a funeral.

No cause of death is established yet.

The Metropolitan Police acted appropriately at the vigil in Clapham Common, an inspection finds.

Officers ‘did their best to peacefully disperse the crowd, remained calm and professional when subjected to abuse and did not act inappropriately or in a heavy-handed manner’.

Reclaim These Streets, which arranged the initial vigil, claims the findings further damage trust in the police.

Sarah died from compression of the neck, a second post-mortem examination concludes.

An initial post-mortem was carried out on March 17, but the examination proved ‘inconclusive’.

Couzens pleads guilty both to kidnap and rape, appearing at the Old Bailey via video-link.

The court hears he also accepts responsibility for Sarah’s death.

He does not enter a plea on the charge of murder.

The woman in her 30s who was arrested on suspicion of assisting an offender is released with no further action.

Five of Sarah’s family members watch as Couzens confesses to murder, via video link at the Old Bailey.

Cressida Dick apologises to Sarah’s loved ones in a statement read outside court.

She says the force is ‘sickened, angered and devastated’ by Couzen’s ‘dreadful’ crimes.

It comes as police forces face enquiries from the Independent Office for Police Conduct (IOPC) in relation to the case.

Kent Police is being investigated over whether it handled allegations of indecent exposure against Couzens in 2015 properly.

The Met is also accused of not adequately investigating another claim that Couzens had exposed himself days before Sarah’s murder.

Couzens is dismissed from the Met with immediate effect following a private misconduct hearing.

Horrifying details of Couzen’s heinous crimes come out in court as his two-day sentencing hearing begins.

Sarah’s dad Jeremy Everard looks her killer in the eye as he tells him: ‘I can never forgive you for what you have done.’

Her mum Susan says she’ll be haunted by her daughter’s last moments ‘for the rest of my life’.

Sister Katie breaks down in tears as she asks Couzens: ‘How dare you take her from me? The future I was supposed to live with my sister no longer exists.’

Couzens is given a whole-life jail sentence at the Old Bailey. He will die in prison.