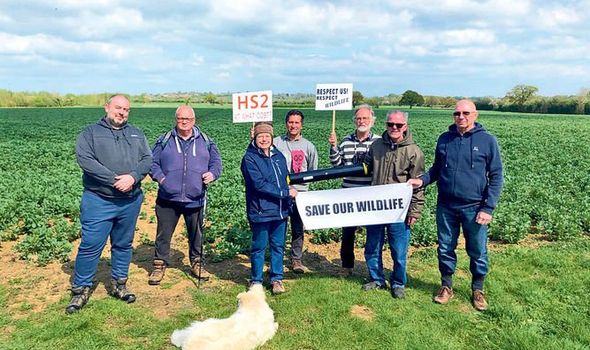 The future of the controversial multi-billion pound project is in the balance, with conclusions of the independent Oakervee review expected in the coming weeks. Full-scale construction cannot begin until HS2 is granted “notice to proceed” but there is strong concern that, in the meantime, preparatory work will permanently damage stretches of countryside. Former Cabinet minister Dame Cheryl Gillan, Conservative MP for Chesham and Amersham, wants to apply the emergency brake.

Responding to protests in the Buckinghamshire communities of Great Missenden and Steeple Claydon, she said: “The future of HS2 remains uncertain.

“It is irresponsible and unfair on the local community for enabling works to continue, much of which cannot be reversed if HS2 does not continue.

“I anticipate that in the coming weeks, Douglas Oakervee will report to the Department for Transport on the future of HS2. Until then, all works must be halted before more permanent damage is done.”

Steeple Claydon’s parish council has called on Transport Secretary Grant Shapps to order a halt to clearance works it claims would result in the “destruction of hundreds of acres of farmlands”.

Protester Frank Mahon, landlord of the Prince of Wales pub, said: “We’re out on site every morning from eight o’clock. Every time they pull the diggers out we stand in front of them. On the ground it’s absolutely crazy down here.”

Joe Rukin, of Stop HS2, said: “At a time when the impact on the natural world has never been more in focus, it seems totally irresponsible to be going ahead with something which – if HS2 were to be cancelled – would only be described as environmental vandalism.”

An HS2 spokesman said: “One of the biggest challenges facing this country is climate change, and road and air travel are significant contributors to this. The most effective way to cut transport carbon emissions and improve our air quality is to invest in rail, including HS2.

“During the Oakervee review we must strike a sensible balance between keeping the programme on track while recognising that some works cannot be undone.”

Transport minister Paul Maynard said: “The enabling works that are taking place now, including those at Steeple Claydon, are necessary to enable the construction of HS2 to proceed
in accordance with the programme.

“The Prime Minister has also made clear that the independent review of HS2 should not unnecessarily delay progress with the project should the Government decide to continue with it.”

Gentle and mild with zero chance of snow