An enormous explosion at a Russian oil and gas field is fuelling suspicions key facilities are being targeted in sabotage attacks linked to Vladimir Putin’s war in Ukraine.

Dramatic footage of the event shows Armageddon-like flames shooting into the sky at the Markovskoye condensate treatment in the east Siberian district of Ust-Kut, Irkutsk region.

More than 1,000 square metres are believed to have caught fire in the blaze, which spread rapidly due to ‘jet fuel’ stored at the facility.

At least seven people suffered injuries in the blast, which occurred just three days after a similar explosion at another oil facility in the nearby city of Angarsk, which was so loud it was compared to an earthquake or plane crash.

In the video of the latest blast, a breathless worker at the plant can be heard saying: ‘Vanya we are f****d, the plant exploded.

‘They told us to evacuate. And as we started fleeing, it exploded.’

Following the explosion, Russian authorities rushed out a statement declaring the blaze to be over even though it was clearly still burning in the remote region. 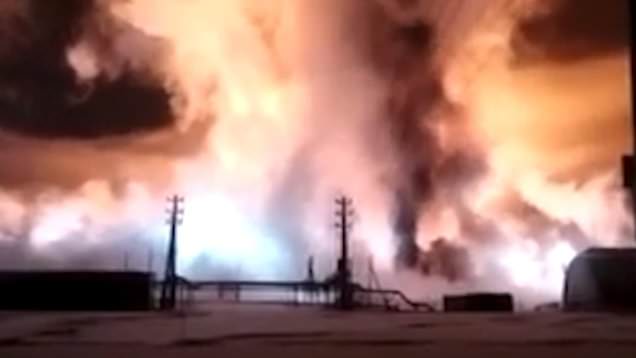 A report on the Telegram messaging app said firefighters gradually brought the fire under control and were putting out remaining small outbreaks. There was no danger to other units of the field or to residents, it said.

Governor Igor Kobzev failed to mention the explosion heard by witnesses in his statement, and claimed: ‘The fire was extinguished at the complex natural gas treatment plant at the Markovskoye field. There is no threat to residents.’

He posted on Telegram: ‘According to the Emergencies Ministry, there were no deaths.

Apart from burns, one of the people with injuries suffered frostbite.

Mr Kobzev admitted 155 firefighters were deployed seeking to control an inferno some estimates said had spread to 10,700 square feet.

The plant is privately owned by Irkutsk Oil Company, one of Russia’s largest private oil companies, and is a key player in the Siberian economy.

Putin has recruited tens of thousands of his fighters from Siberia, and the Irkutsk region has suffered a high mortality rate.

The facility produces crude oil as well as condensate and natural gas, and is co-owned by Russian billionaire Nikolay Buinov, 55.

The explosion and initial fire started soon after 11pm local time on Sunday.

Officials say the blaze will not spread, and a probe has been launched into the cause of the explosion and fire.

Recently there have been explosions and fires at shopping malls as well as energy facilities, raising fears of sabotage against Putin’s unpopular war in Ukraine, which has seen more than 100,000 Russian killed or injured.

Two such infernos have ravaged major malls in Moscow this month.

Prince George understands he will be King one day