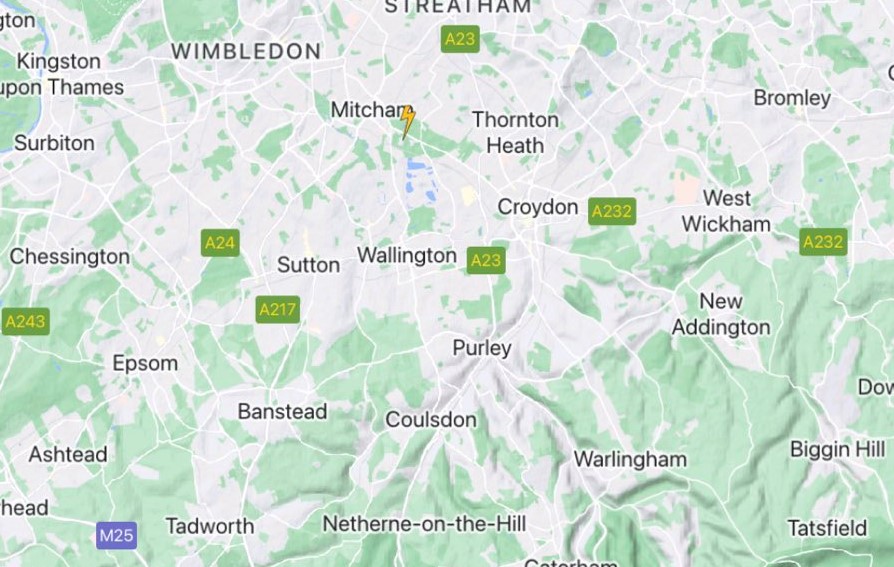 If your evening was disturbed by a massive clap of thunder last night, it’s because an of an epic lightning bolt.

The energy created by the ‘positive strike’ was around six times more powerful than a normal clap of thunder.

It echoed across most of South London and into Surrey yesterday evening at around 9.30pm.

Huge downpours rained down with parts of London left flooded by the bad weather.

Drivers even abandoned their cars as some roads were submerged due to the heavy rain.

At around 9pm people in both north and south London said they heard the massive crack, with it reported to have been around 90 kiloamps (kA).

The usual voltage of lightning strikes is said to be around 15kA.

Another said: ‘What the f*** was that? Lightning?’

Stephen, who lives in Mitcham, told Metro.co.uk: ‘So I’d just got home from work and was having dinner, it had been raining all day but no thunder or lighting, just one of those long drizzly days.

‘At about 8.45pm there was a sudden flash and a huge rolling boom. It sounded just a huge cannon had gone off, like the ones they fired for the Queen.

‘For a moment, because of all the madness with Russia and Poland, I had a genuine thought of, “Oh god, what if it’s an attack! Or some kind of electrical explosion?”

‘I went on to Twitter to find lots of tweets about it as well, reassuringly it was just thunder but wow, someone really annoyed Thor last night.’

One person said they heard the lightning in Canary Wharf, during the sudden 10-minute storm.

Nearly 20 miles away in Twickenham, south west London the bolt shook one person’s house so much it sent brick dust down their chimney.

They said: ‘Saw the flash in Twickenham and chimney shook so much at the bang that a bunch of brick dust came down.’

In Mitcham, south London, it was reported to have struck over the Common.

A third warning will come into force at 3pm on Thursday until 6pm on Friday for the east coast of Scotland, stretching from the English border up past Aberdeen with similar risks of flooding, and transport disruptions.

Did you see the lightning? Did you hear the massive bolt? Or did you get any photos of the flash?

Please get in touch with [email protected] if you did.