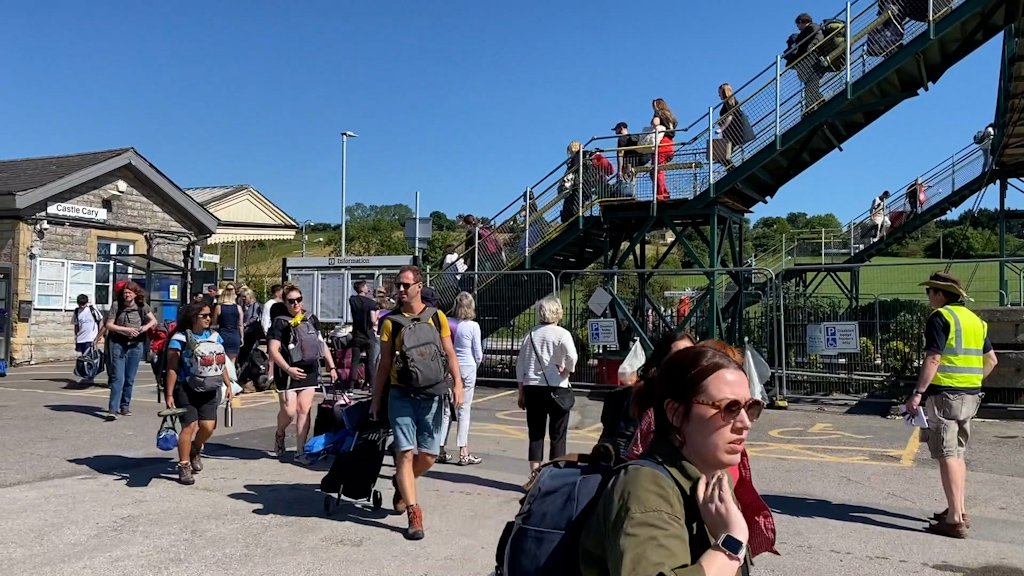 Hundreds of keen campers arrived at Glastonbury by train yesterday in a bid to avoid travel chaos caused by this week’s rail strikes.

Footage shows dozens of people carrying their rucksacks and tents as they arrived at Castle Cary station in Somerset.

Their shrewd thinking came ahead of today’s action which has shut down much of the country – with the biggest strike in a generation leaving stations deserted and making things feel a little like lockdown returning.

More than half of the trains due to serve the long-awaited festival – which has not run since before the pandemic – have now been cancelled.

Tens of thousands of people have now had to find alternative routes to the site in Pilton, which is why some have chosen to arrive early.

Others arrived early to mark this year’s summer solstice at the ancient Glastonbury Tor site, which is a tradition for some.

But most people are expected to attempt to travel tomorrow – the day sandwiched in between two days of strike action.

Delays are expected, but people are hoping to make it through the chaos before heavy cancellations make it near-impossible on Thursday.

NHS worker Huw, from Liverpool, fears he may not make it into the festival due to the rail strikes.

The 28-year-old has had his ticket booked since October 2019, which was delayed due to the pandemic.

But his ticket requires him to travel via a festival-organised coach from Brighton at 7am tomorrow. But he does not finish work until 9pm tonight, and the final train from Liverpool to London is at 4pm.

So he has now spent £70 on the earliest available bus to the festival on Thursday morning hoping he will be allowed entrance.

‘Festival tickets are given out on the coach, so there’s a very real possibility that this rail strike means I can’t actually get into the festival,’ he said.

‘I’m making my own way from Liverpool on Thursday morning and will be relying on the goodwill of the Brighton coach driver to hand my festival ticket over either to the box office or to my mates who’ll meet me at the gate… hopefully common sense prevails.’

Rene Mance, 47, travelled to the festival yesterday to start a new job.

‘I can’t pretend it hasn’t been stressful,’ she said while waiting for her train at Paddington station, ‘It has. I didn’t really sleep very well because I was worried about it.

‘For many people, say a mother with kids or someone disabled, it’s absolute chaos. My situation whatever it is, I would have found a way, but you know, some people are not like me.

‘They don’t have money to get in the cab, and it was a total luxury for me, but it worked.’

Great Western Railway (GWR) is running only five services from London Paddington to Castle Cary on Thursday, with a total of just 24 between Wednesday and Friday.

Before strike action was announced, 51 trains were expected to operate – slashing the total by more than half.

A GWR spokesperson said: ‘We plan to maintain timetabled trains between Castle Cary and London Paddington throughout the course of the Glastonbury Festival.

‘Some services might be subject to alterations to train times and we will be in contact with customers who have already booked seats on board those trains.

‘Other parts of the GWR network are likely to be more affected by the strike action and customers may need to consider alternative ways to travel to a station serving Castle Cary.’

The roads around Glastonbury Festival are expected to be extremely busy and drivers are advised to avoid the area if possible.

The main event is taking place from June 24 to 26, with Billie Eilish headlining the Pyramid Stage on Friday night, being the youngest solo artist to have achieved this so far.

Sir Paul McCartney and Kendrick Lamar will both headline on Saturday night and Sunday night.