Kate, the Princess of Wales and Prince William joined the efforts of the Royal Family to thank members of the public for the support they have shown since the Queen’s death.

The Prince and Princess of Wales met with mourners at Sandringham in order to see the floral tributes left for Her Majesty, while the Earl and Countess of Wessex visited Manchester Cathedral, where many more tributes to the Queen have been left by members of the British public.

The Queen’s funeral is set to take place on Monday the 19th of September, and many more hundreds of thousands of people are expected in London to say goodbye to Her Majesty.

The crowd snaked around the grass where they were held back by security gates.

The mourners can be seen waiting from as far as the eye can see to get a glimpse of Prince William and Princess of Wales, Kate.

The Royal pair are expected to meet with the mourners in order to view floral tributes to the Queen.

The Royal Family are still keeping up with their duties whilst Her Majesty is laying in state at Westminister Hall. 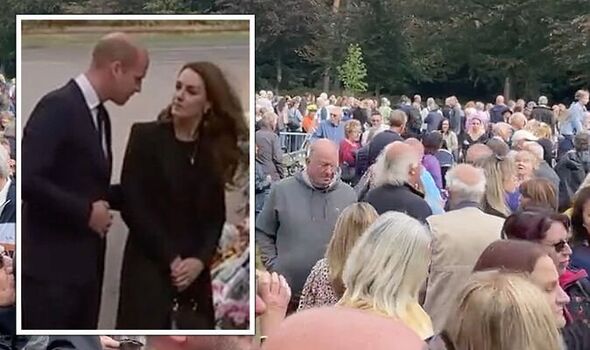