Tributes in memory of the Queen have been pouring in from across the world since the Palace confirmed she had died on Thursday. Large crowds have been gathering outside the Royal Family’s main residences, with hundreds assembling just outside Buckingham Palace to show their support for the Royal Family. Long queues have been forming just off Constitution Hill, central London, as hundreds of mourners wait for their chance to lay down flowers and cards for the Queen.

Live footage from outside the Palace has shown a large number of mourners have already joined the queue on Saturday to be able to pay their respects.

Video circulating online from Friday have shown people waiting to make their way to the palace’s gate all along the outside wall of the royal residence from the Victoria Memorial up to Hyde Park corner.

Mourner David Horrocks said: “She has been so strong, she’s seen a lot of adversity with what she’s seen in the country.

“She has proved to be a very strong character, someone to look up to.”

JUST IN: Heartbreaking detail in Charles’ first speech is touching nod to Queen 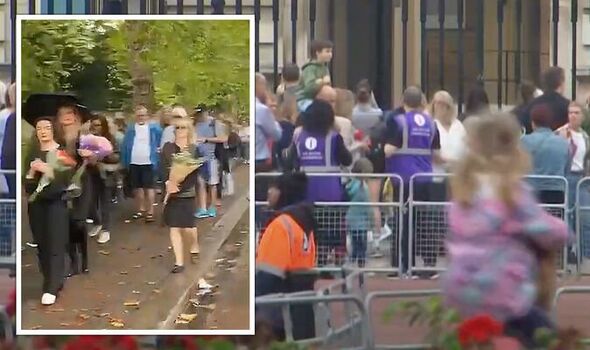 South African tourist Linda Hlonjwa said: “She just welcomed the new prime minister two days ago, and now she passes away. It’s a lot of change, I hope they can just sustain what she started.”

Caroline Sutton and her mum Sue came to London from Kent to lay a £10 bouquet in memory of the Queen.

Ms Sutton said: “We just wanted to show how grateful we are for everything she’s done.”

Sue added: “I wanted to come more than she did.

“I would have liked to have come with my own mum, but I can’t. She’s all I’ve thought about, really.”

Meghan's father claims he was 'hung out to dry' by her