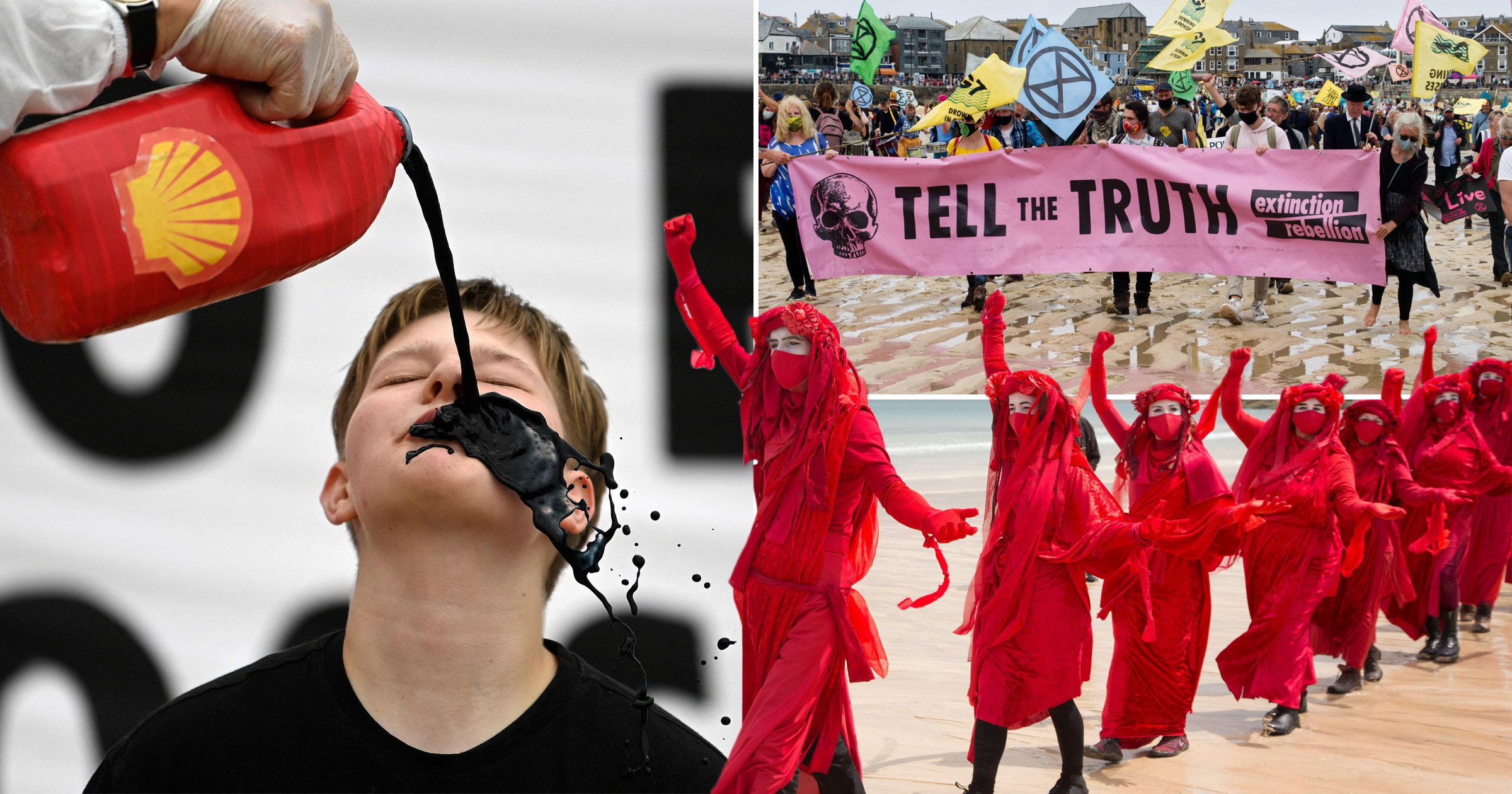 The climate change group has planned several demonstrations in the run-up to and during the three-day conference.

Activists want to hold world leaders responsible for their ‘failure to respect the global climate commitments they made in Paris in 2015’.

Today saw protesters gather in St Ives, where people gave speeches in the town-centre before marching through the rest of the sea-side location and blocking multiple roads.

More than 500 walked to the beat of a continuous drum chanting ‘act now’, ‘sound the alarm’ and ‘liars’.

Local Senara Hodges, 51, said she was ‘delighted’ the campaigners were protesting.

The filmmaker said: ‘It’s absolutely fantastic. They are not causing the disruption – the Government is with its lack of action.

‘We are severely disrupted by the G7. It’s a huge imposition on a very, very busy town during peak season. It feels like a typical lack of understanding of the impact.’

Many were dressed in colourful robes, representing the different specialist factions in Extinction Rebellion, whilst others just wore the organisation’s symbol on regular clothes.

The group hope all their protests will ‘urge the leaders meeting at Carbis Bay to act immediately to address the Climate and Ecological Emergency’.

Today’s march was focused on highlighting Extinction Rebellion’s position that ‘a wealthy minority of the world’s countries and corporations are the principal cause of the climate and ecological crisis’ despite its effects ‘falling first and foremost on the poor’.

Tomorrow, activists will demonstrate in Falmouth over governments, the media and corporations allegedly ‘greenwashing’.

‘They might appear to be saying some of the right things about climate action, but their words are often a cover for  lies, half truths and disinformation,’ the group said. 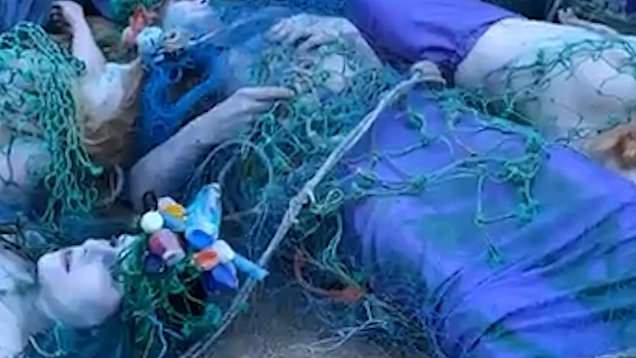 Sunday’s protest will return to St Ives to demand a ‘Citizens’ Assembly on climate and ecological justice’ to ‘place power in the hands of citizens’.

Devon and Cornwall Police have warned locals to expect delays and disruptions throughout the weekend.

In a separate demonstration, performers dressed as mermaids, posing as dead bodies at the bottom of the ocean.

Ocean Rebellion put up signs on St Ives’ beach saying: ‘As the sea dies we die’ to plead with leaders to ‘choose to do the right thing’.

Sailor Laura Baldwin, who competed in the 2004 olympics said: ‘I’m down here for the duration of the summit. I learnt about the climate emergency in January 2019 and I’ve not been able to focus on anything since.

‘I’ve absorbed and understood the dire warnings of the world-leading scientists, academics and David Attenborough. I’m the mother of an eight-year-old son and there’s constant contradictions of their words with their actions. As a result I’m terrified for the future of my child and all our children.

‘I think it’s wonderful to see so many people coming here today in creative ways.’

The 41-year-old added: ‘I’m part of Ocean Rebellion because I’m an Olympic sailor and the ocean is where my heart is. I love the water and respect it.’

What next? Brexit scenarios under PM Boris Johnson