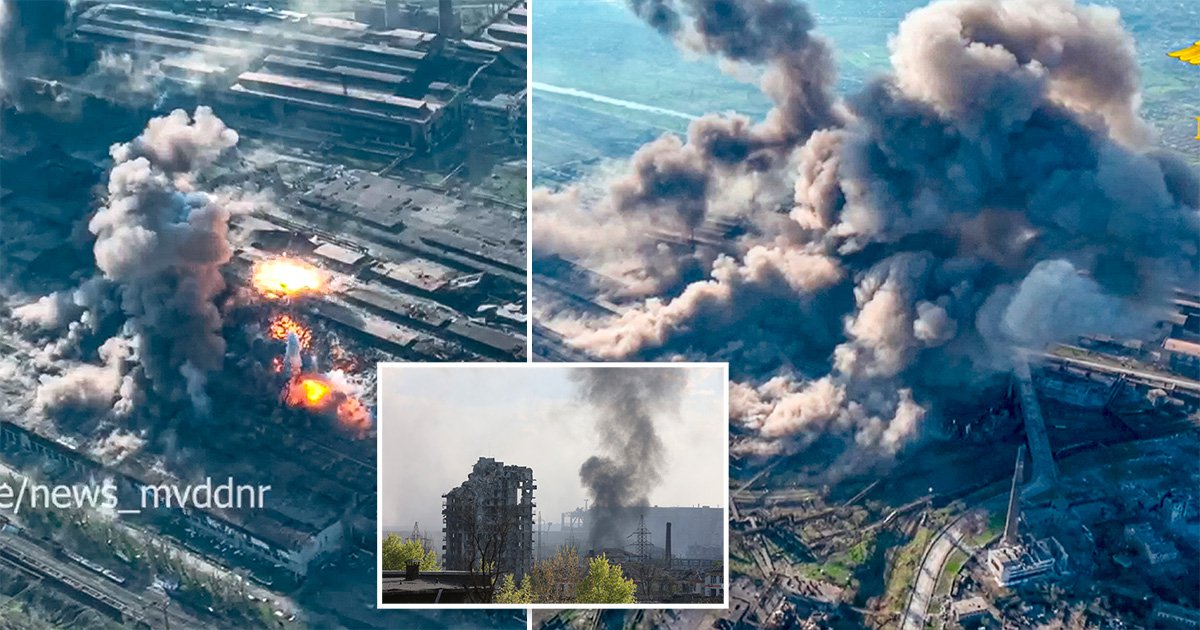 Hundreds of women and children remain trapped at a steel plant in Mariupol amid scenes of ‘heavy, bloody fighting’ as Russian forces battle to seize control of the ruined city’s last stronghold.

The fierce attacks come amid growing speculation Vladimir Putin wants to present the Russian people with a major battlefield success – or announce an escalation in the war – in time for Victory Day on Monday.

Some 2,000 Ukrainian fighters and an estimated 200 civilians are still holed up in the tunnels and bunkers under the sprawling Azovstal steelworks, the last pocket of resistance in a city largely reduced to rubble.

Anton Gerashchenko, an adviser to Ukraine’s Internal Affairs Ministry, said the Russians managed to get inside with the help of an electrician who knew the layout.

He added: ‘He showed them the underground tunnels which are leading to the factory.

‘Yesterday, the Russians started storming these tunnels, using the information they received from the betrayer.’

The Kremlin denied its troops were attacking the plant.

Mariupol’s fall would be a major success for Moscow.

It would deprive Ukraine of a vital port and allow Russia to establish a land corridor to the Crimean Peninsula, which it seized from Ukraine in 2014.

A victory would also free up troops to fight elsewhere in the Donbas, the eastern industrial region that the Kremlin says is now its chief objective.

Captain Palamar pleaded with international allies to pressure Russia into allowing more civilians to be rescued from the steelworks, along with wounded fighters who ‘are dying in agony due to the lack of proper treatment’.

The Kremlin has demanded the fighters surrender. They have refused. Russia has also accused them of preventing the civilians from leaving.

Kateryna Prokopenko, the wife of Azov Regiment commander Denys Prokopenko, said that without an evacuation operation by European leaders, the troops inside will die.

She told the Associated Press: ‘They stand till the end. They only hope for a miracle. They won’t surrender.’

Ms Prokopenko described a call with her husband in which he said he would love her forever, adding: ‘I am going mad from this. It seemed like words of goodbye.

‘They have held out too long and deserve to be saved.’

Meanwhile, 10 weeks into the devastating war, Ukraine’s military claimed it recaptured some areas in the south and repelled other attacks in the east, further frustrating Putin’s ambitions after his abortive attempt to seize Kyiv.

Ukrainian and Russian forces are now fighting village by village.

The head of Britain’s armed forces, Chief of the Defence Staff Admiral Tony Radakin, said Putin is ‘trying to rush to a tactical victory’ before Victory Day.

But he said Russian forces are struggling to gain momentum in the Donbas.

Admiral Radakin told Talk TV that Russia is using missiles and weapons at such a rate that it is in a ‘logistics war’ to keep supplied. He added: ‘This is going to be a hard slog.’

Fearful of new attacks surrounding Victory Day, the mayor of the western Ukrainian city of Ivano-Frankivsk urged residents to leave for the countryside over the long weekend and warned them not to gather in public places.

And the southeastern city of Zaporizhzhia, a key transit point for evacuees from Mariupol, announced a curfew from Sunday evening through Tuesday morning.