Home » Europe » ‘I Am Always Asked if I Am Afraid’: Activist Lawyer Takes On Putin’s Russia

MOSCOW — After nearly losing her husband to an attack with lethal poison and surviving repeated clashes with burly Russian police officers, Lyubov Sobol looked on the bright side last week when she was targeted yet again in a long campaign of intimidation.

“At least it wasn’t fecal material,” Ms. Sobol, a 31-year-old lawyer and opposition activist, said in an interview shortly after an unidentified assailant threw slimy black goop at her as she was getting into a taxi near her Moscow apartment block.

Ms. Sobol has for years annoyed the Kremlin with her dogged pursuit of evidence of graft and greed among associates of President Vladimir V. Putin, particularly the businessman Yevgeny V. Prigozhin, a former hot-dog seller known as “Putin’s cook” who has been indicted by the United States in connection with the troll factory that spearheaded Russian meddling in the 2016 American election.

But Ms. Sobol has in recent weeks become a special hate figure for Russia’s political and business elite thanks to her role as a driving and unbending force behind a wave of street protests that have roiled the Russian capital and led to thousands of arrests.

“I am always asked whether I am afraid, and I know that I should say, ‘Yes, I am,’” she said in the Moscow studios of NavalnyLive, an online channel that she runs for Aleksei A. Navalny, Russia’s highest-profile opposition leader.

But, she added: “I am a fanatical kind of personality and am not afraid. I have always been a fan of the idea of fairness and, since childhood, have hated to see the strong abuse the weak.” 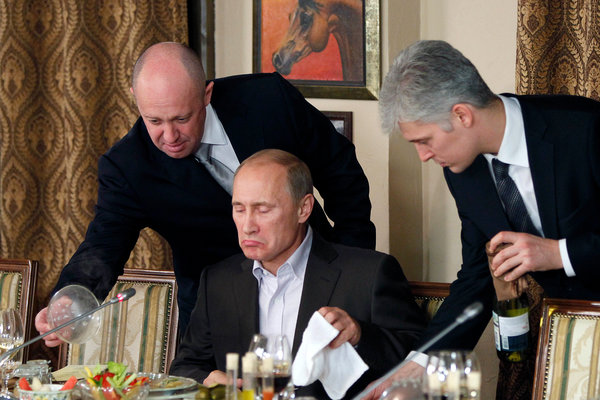 Little known to the general public until the recent demonstrations, which were set off by fury over the disqualification of Ms. Sobol and several other opposition candidates from municipal elections, she shot to fame over the summer as the passionate, telegenic face of a revived, though still largely Moscow-centric, Russian protest movement.

State-controlled Russian news media outlets, in keeping with the Kremlin’s policy of trying to ignore Mr. Navalny and his associates, rarely mention Ms. Sobol by name.

But websites controlled by Mr. Prigozhin have mocked her as a hysterical temptress, asking in one report: “Who is the chick in a nightdress: Why did Lyubov Sobol undress in a video?”

Often followed by thuggish young men, she has been threatened and even attacked physically, as happened when she was splashed last week with the black muck near her home.

That incident recalled a 2017 assault on Mr. Navalny, who nearly went blind from a green chemical liquid thrown in his face.

In early August, heavily armed police officers in masks broke open the door of Ms. Sobol’s office and dragged her away shortly before the start of a protest rally. Before that, security officers removed her from the offices of the election commission by carrying the sofa on which she was sitting out onto the street.

While sometimes described as Russia’s Joan of Arc, Ms. Sobol is not particularly religious, though she does go to church. She is less a fanatic than a singularly determined activist driven by what she describes as her “hatred” of a system that routinely flouts the law and Russia’s Constitution.

She abandoned a hunger strike last month after appeals from the mother of a detained protester that she start eating. Though still frail from more than three weeks of fasting, she has shown no sign of backing away from her zeal for protest.

Last Saturday, thousands of Muscovites answered her call to join an unauthorized march along a tree-lined pedestrian walkway in the center of the Russian capital. The turnout was smaller than that for protests in late July and early August called by Mr. Navalny. But it was still a bold act of defiance in a city where protesters and even pedestrians who happen to be in the vicinity risk being beaten and arrested by baton-waving riot police officers in body armor.

Olga Nazarenko, a 44-year-old teacher who attended the march to show support and waved a banner denouncing Mr. Putin’s administration as an “organized crime group,” said she did not always agree with Ms. Sobol. But she said she nevertheless admired Ms. Sobol’s fearless determination in the face of a system “that spits on the people” by denying them competitive elections in favor of a “farce of democracy.”

Prevented from attending previous rallies by the security forces, Ms. Sobol managed to slip surveillance and make it to the march, taunting the authorities in videos posted on her Twitter account: “Hello, everybody, and hi, too, to everyone from the Moscow police and the Investigative Committee. I am not afraid of you and have come out today to the center of my native city, Moscow, in order to express my disagreement.”

Ms. Sobol grew up in a suburb north of Moscow near the main airport, Sheremetyevo, where her mother worked as a supervisor, while her father was associated with a flight research institute.

A fan from childhood of Sherlock Holmes and a law graduate from Moscow State University, Russia’s most prestigious university, Ms. Sobol worked for a time as a clerk in a Moscow courthouse. But she took a decisive turn away from a quiet and conventional legal career in 2011 when she took a job with Mr. Navalny’s Anti-Corruption Foundation.

Responsible for helping Mr. Navalny file legal complaints against corrupt officials and Kremlin cronies, she poured her energy into investigating Mr. Prigozhin. On behalf of parents who say their children were poisoned by tainted food provided by Mr. Prigozhin’s catering business to Moscow kindergartens, Ms. Sobol, who has a 5-year-old daughter, waged a long campaign to have the businessman punished and his state contracts canceled.

By taking on Mr. Prigozhin, whose business empire has expanded far beyond catering to include media operations, mining interests in Africa and security companies involved in sending mercenaries abroad, Ms. Sobol put herself on a collision course with one of Russia’s most feared and ruthless figures.

Novaya Gazeta, a Moscow newspaper that has reported extensively on Mr. Prigozhin, was last year sent a gift basket with the severed head of a goat. The journalist who wrote an investigative report about the businessman received a funeral wreath.

Ms. Sobol blames Mr. Prigozhin for a 2016 attack in which her husband, Sergei Mokhov, an anthropologist, was injected with poison in his upper thigh. The case was never solved. Mr. Prigozhin has not commented directly but announced in June that he would sue Ms. Sobol for damaging his reputation.

But it is her role as a protest organizer that has turned Ms. Sobol into probably Russia’s best-known opposition activist after Mr. Navalny, who, repeatedly jailed in the past, has stood aside from the most recent protests to avoid being arrested yet again. Ms. Sobol cannot be sent to prison, thanks to a Russian law that prohibits the jailing of women with children under the age of 14.

Wearing pink sneakers and fashionably clunky glasses, Ms. Sobol spoke with quiet fury about the exclusion of opposition candidates like her from elections for Moscow’s city council, which are being held on Sunday.

She acknowledged that the council has little real power but said the elections, had they not been rigged, would have “destroyed two myths the authorities use to stay in power.”

The first of these, she said, is that “only 1 to 2 percent of the population support the opposition,” while the second is that “all we do is shout in public squares and have no real program or ideas.” Fair elections, she said, would show that “we exist” and that Russia is not destined to be ruled in the same way forever.

Russians, she said, are still a long way from turning out in huge numbers as protesters have done over the past three months in Hong Kong. But, she added, the Kremlin is nonetheless spooked by even modest gestures of defiance.

“Putin is terrified by the example of Maidan,” she said, referring to streets protests in Kiev, the capital of Ukraine, that in early 2014 drove the Ukrainian president from power.

The Russian authorities recently announced that they had found legal “violations” in her husband’s scholarly journal, “The Anthropology of Russian Death.” The alleged violations involved small technical matters, but the Russian authorities have a long record of using trivial issues to begin laborious and potentially crippling investigations.

The journal’s troubles, Ms. Sobol said, did not seem serious — at least not yet — but nonetheless show that “the whole machinery of the state” “has now been mobilized” against her.

She said her husband worried about her safety but supported her and had agreed, for the moment, to drop thoughts of moving the family abroad so he could pursue his academic work.

“I have to be here in my own country,” she said. “I strongly hate Putin and his system.”