Voters in Weston-super-Mare, a town which voted 52 percent to leave the European Union, have expressed their views on the political situation in Britain ahead of the European elections on Thursday. One resident chuckled as she told BBC News: “They can shove Europe up their – I won’t say it. I won’t repeat it.”

They can shove Europe up their – I won’t say it

Another person, said: “I’ve been blocked on Facebook several times for my comments on Theresa May and every other little bits that come up.”

When asked by the BBC’s Greg Dawson about her thoughts on Britain’s participation in the European Parliament elections, she said: “I’m very very angry.

“You’ve got to vote Brexit Party. We want out of the EU.”

While one resident said she will never vote again. When asked if she would vote in another general election, the resident said: “I don’t think so because I wouldn’t vote for any of it. 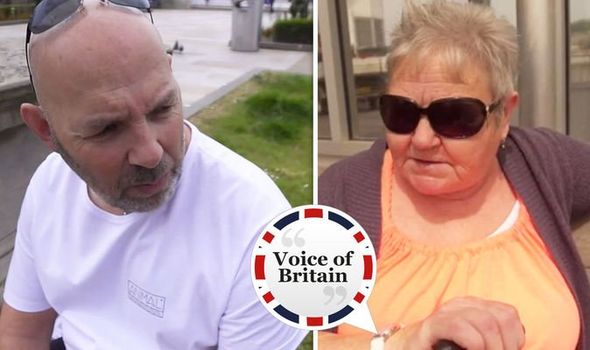 Another person insisted leaving the EU is in Britain’s “best interests”, adding: “It would open up the whole world to us to trade, rather than just one particular part of it.

“But I mean there are lots of plusses and minuses. I think that we should Leave because the country voted to Leave.”

But another Brexit voter was less convinced by their decision in the June 2016 Brexit referendum in which 17.4 millions Britons voted to leave the Brussels bloc.

“I saw the big red bus and I thought ‘well, the NHS needs the money’. I now probably feel like I would prefer to stay. Just on the basis that however how many more things have they said that they would do and it doesn’t happen.

“So, I am caught between a rock and a hard place. We voted and we should stick by that. It is an insult to us, the people, to not stand by what we voted for.”

The comments come as Prime Minister Theresa May prepared to make a statement to MPs on her new Brexit offer as she sets attempts to win over the support of Labour MPs ahead of a fourth vote on her deal.

The new deal is the latest attempt from the Prime Minister to win over critics throughout the House of Commons who have already voted down her Brexit agreement on three occasions.

Mrs May will put the Withdrawal Agreement Bill before Parliament early next month, with a possible defeat set to accelerate her departure from Number 10.

The Prime Minister held a three-hour Cabinet meeting on Tuesday and will make a statement to MPs in the Commons on the deal at 4pm.

She told the Cabinet: “The Withdrawal Agreement Bill is the vehicle which gets the UK out of the EU and it is vital to find a way to get it over the line.”